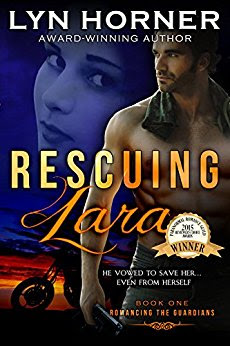 “Lara Spenser is running for her life. She guards a treasured relic from ages past that no one outside a select group is supposed to know about. Yet, an evil one has learned of its existence and his minions are hot on Lara’s trail. Although she has escaped to Ireland and is living under an alias, her special sixth sense tells her the ‘Hellhounds’ are growing near. Injured in a car wreck that killed her beloved uncle, she is desperate for someone to act as her bodyguard.

Enter Connor O’Shea, ex-Special Forces soldier. Now the foreman for a crew of oil and gas well firefighters, Conn is on an extended vacation after a devastating explosion on his last job. Out of curiosity, he answers Lara’s ad for a ‘strong chauffeur’ and takes on the job of guarding her temporarily.

Conn has his hands full, not only keeping Lara safe but also trying to help her recover from deep physical and emotional wounds. As days and weeks pass the two grow closer and romance blooms, but their tenuous peace is shattered one terrifying night by Lara’s pursuers. Conn may prove his ability to protect her, but can he help her fulfill her destiny as High Guardian of apocalyptic secrets? Can he rescue her from the soul-deep pain that holds her prisoner?”

Lara is temporarily wheelchair bound after a suspicious car wreck that left her scarred and her uncle dead. His death makes her the heir to an ancient family scroll of their Druid ancestry and sacred secrets she has promised to guard with her life.

She flees to Ireland hoping to dodge the Hellhounds who are pursuing her. Realizing she needs a bodyguard, she hires Texan Conner O’Shea, but she is reluctant to share too much information with him. Conner happens to have Irish blood in his family also and has promised his mother while he is in Ireland he will try to locate some descendants from their family line. Lara quickly begins the search with the help of her hired housekeeper, who wasn’t too fond of Conner in the beginning. However, Conner is a smooth operator and finds his way into her good graces easily enough.

It was easy to imagine the Irish countryside with the author’s descriptive prose as Conner becomes tour guide for Lara, trying to distract her from obsessing about the Hellhounds. When Lara’s sixth sense picks up a warning that the Hellhounds have found her cottage, Conner decides to take Lara back to Texas with him as quickly as they can. Ms. Horner does a good job weaving the tension and suspense of the main story arc of Lara’s mission with the ancient Druid scroll and being pursued by the Hellhounds with Lara’s own emotional dilemmas. She is a strong-willed woman with some emotional insecurities that get the best of her at times. Conner has lost his heart to her and does his best to prove his worth and devotion to Lara despite the fire and brimstone she throws at him. He will pull all of his resources together to protect Lara and help her fulfill her mission to locate the other guardians and defeat the Hellhounds.

This is book one of the Romancing the Guardians series. It ends with Conner and Lara fleeing west out of Texas in search of a safe hiding place. It’s going to be very interesting to see how things develop next with Dev, an ex-friend/employee of Conner’s, who has offered to assist Lara.

This book does contain sexual situations that may offend some.