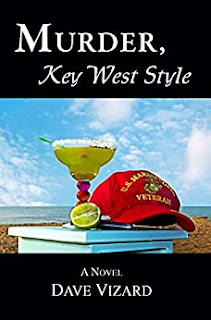 “This fast-paced novel starts with the mysterious death of an American war hero who dies alone and homeless in Key West, Florida, one of the world's great tourism meccas. Millions of people flock to the island at the bottom of the United States. Fabulous weather, terrific views, a laid-back lifestyle, incredible boating and fishing. No wonder many refer to Key West as paradise. Those attributes also prompt the homeless to gather in a place where sleeping outside is ideal most of the year. News reporter Nick Steele takes the woman of his dreams to Key West to get married and honeymoon, but gets pulled into the death of the Marine Corps veteran. More digging by the news reporter reveals a shocking side of Key West that few have ever seen. Lively, colorful characters, a winding, twisting plot and sharp writing make this novel a must read.”

Dave Vizard has worked as a journalist, taught writing and journalism at the college level, and has now released this, his fourth novel. Vizard lives in Michigan’s thumb, near Lake Huron.

On an impromptu trip to Key West in order to get married and then honeymoon, Nick Steele gets drafted by his newspaper employer to do some quick research on the story behind the death of a war hero from his hometown. That quick research turns into a trip down the rabbit hole and a much bigger story than expected. As Nick digs, he solves the mystery of what happened, but uncovers something bigger. How big and what it involves I won’t say so as to not spoil the mystery. I’ll just say that the answer isn’t obvious and in the end the complete answer is bigger than I anticipated.

As you’re solving the mystery alongside Nick, if you’re paying attention, you might find your mind taking detours as you consider various subjects. The plight of the homeless is one. Various organizations, public and private, that are there to help the homeless and how things might work or go astray is another. The issue of veterans and the long-term effects they sometimes suffer from and what might be done to help is yet another side trip my mind took. I’m sure other readers will find the story to be thought provoking for other reasons. But most important, in the end, this is a good and entertaining read.