Review: The Old Overholt and Other Stories by Michaela Casey 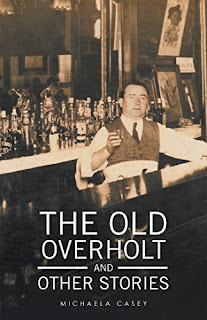 “A dreamer, a talker, a merrymaker, and a moralist, Tim Cadigan is classic Boston Irish, just the kind of local color that writer Mitch Goldberg is looking for when he moves to a working-class Dorchester neighborhood. Mitch soon learns that his elderly neighbor is both a prolific storyteller and a fascinating character, hilarious and neurotic, open-minded and self-righteous, kind and thoughtless, honorable and cagey, forgiving and grudge holding.

After hearing dozens of stories from Tim’s family and friends, Mitch decides to compile a broad sampling, including his own favorite, in which Tim produces a deathbed miracle of sorts with a shot of whiskey and a beer chaser. Blending humor and poignancy, other stories describe Tims righteous defense of a tenant victimized by prejudice, his madcap efforts to get the pope to stop in for tea, his extraordinary determination to reverse his brother’s mental illness, his annual yuletide roast of the regulars at the Connemara Gardens Bar and Grille, and his final days at the home he loves.

The Old Overholt and Other Stories is a lively portrayal of an endearing, complex individual and the people, times, and place that shaped him.”

All I can tell you about the author is that this appears to be her only book published thus far and that she lives in Maine.

I’ve read short story collections before. Sometimes those have some common theme that ties the stories together. But I’m not sure I’ve read a set of short stories before that, when I finished, as different as the stories were from each other in many ways, still held together as well as this collection. The concept is that these stories are stories that one person, Tim Cadigan, originally told to one of his friends and the friend is doing his or her best to retell the story for this book. If you’ve ever had a friend or maybe a relative (my Dad is a good example) who tends to tell the same stories over and over, I’d picture something like that. One difference is that Tim is a much better storyteller than my Dad, having spent much of his adult life as a writer for the local newspaper in his Boston neighborhood. (That neighborhood also figures into many of the stories.)

Through these stories the reader may, like me. Feel like they know Tim fairly well. I assume you’ll like him. I did. The collection ends up feeling like a memoir, written not by the person the memoir is about, but by him through his friends. You can be forgiven if you start to think Tim is a real person. Based on other reviews it appears some think he is and it felt like that to me. But I’ve been clued in (and a dedication at the front hints at this) that the author’s father was the inspiration behind the ultimately fictional character of Tim. Even so, I’m glad I got to know him. Through him I learned some things, had some vicarious experiences I’d have not otherwise had, and was thoroughly entertained.