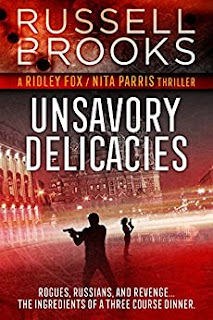 Rogue operative, Monique Beauvais, cons a software genius into selling her a coveted technology that would allow its user to control CIA drones while they’re in flight. And she will go as far as killing him in public in order to have it.

To the Last Bite

A renowned food critic—whose scathing reviews have closed down restaurants—gets a savoury surprise.

CIA operative, Ridley Fox, leads a team against one of Russia’s most powerful crime families. He discovers secrets, but not one that he was expecting to find.

Thriller author Russell Brooks, originally from Barbados, now lives in Montreal, Canada. In addition to this small short story collection, he’s the author of three novels. For more, check out his website.

Three short stories, each an extremely quick read of a couple thousand words, that do what a thriller should do, keeping the reader engaged and curious. You’ll be wondering what’s going on, how it is going to end, and that answer to the second question isn’t likely to be what you’d initially guessed. Given the title of the middle story I can’t resist saying that each story was “good to the last word.”