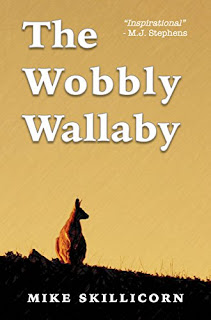 “A mob of wallabies lies on the brink of starvation when a drought strikes the harsh Australian outback. Unwilling to endure the conditions any longer, a single wallaby with a bad knee gathers the courage to leave the protection of the mob to seek out a better place.

Joined by two of his closest friends, the trio begin a wild adventure through the perilous and unforgiving land. Danger follows in every footstep, until they are finally forced to confront their gravest fear...

“Mike Skillicorn is an Australian author and software architect living in Sydney, Australia. Born in Newcastle, New South Wales, he graduated with a Bachelor of Science in Zoology and maintains a passion for the environment and animal conservation. He loves to travel, especially with his snowboard and when he can find a spare moment, enjoys playing guitar.”

Wally Wallaby has had a bad knee since birth, and despite this handicap he works up the courage to implore his mob’s commander to search for food and water. However, the old commander has made up his mind to stay where they are and wait for the rain to come. The problem is once he has spoken his word is law, even at the sacrifice of the mob who are slowly starving to death. Wally decides then that he is breaking the “Wallaby Code” by leaving the mob the following morning to strike out on his own. When day breaks he is joined by his best friends, Jake and Peg. And so the perilous journey begins as they head east in the unforgiving drought of the Australian outback.

During their adventure they encounter several indigenous species some friendly, others not so much. There is a small unrelenting band of dingoes who are trailing and taunting the trio of wallaby’s. The comradery between Wally, Peg, and Jake is admirable and heartwarming. As the adventure continues there are several lessons that could be learned by a young reader. There is also enough tension to keep them turning the pages. The Wobbly Wallaby is an entertaining, and engaging story with some humor spread throughout. I liked the way the wildlife of the Australian outback introduces critters some young readers may not know about already. I would recommend The Wobbly Wallaby to chapter book readers and older kids.

The genre is listed as a children’s story, however, it is for young readers’. There are two other books in the series published at the time I wrote this review.