Review: The Payoff by Lynne Cantwell 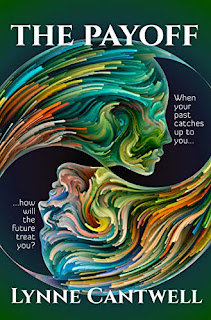 Janis Fowler and Jan Marek grew up together, the only two students at the Institute, a research facility and school for children with paranormal abilities. Or so their parents were told. In reality, the Institute’s director, Dr. Denise Tandy, had her own plans for their talents – Janis can read a person’s past and Jan can see a person’s future – and when the kids resisted her, she was ruthless at getting them to comply.

At last, Janis and Jan escaped – and split up, knowing it was the only way to protect both themselves and each other. But they knew they would reunite someday, when the time was right.

Forty years later, the time has come. Their old tormentor has turned up again. Her game is the same, but her newest ruse is more dangerous than ever. And she’s recruiting more victims.

Jan and Janis must use their powers to put an end to Dr. Tandy’s vile scheming – without risking each other. It’s a tall order for two people who have been hiding in plain sight for four decades. But with age comes wisdom. And they have waited long enough to see justice served.”

“Lynne Cantwell writes mostly urban fantasy and paranormal romance, with a dash of magic realism when she’s feeling more serious. She is also a contributing author for Indies Unlimited. In a previous life, she was a broadcast journalist who worked at Mutual/NBC Radio News, CNN, and a bunch of other places you have probably never heard of. She has a master’s degree in fiction writing from Johns Hopkins University. She lives in New Mexico.”

To learn more about Ms. Cantwell and discover her other Kindle books visit her website.

The Payoff begins by introducing Janis Fowler and Jan Marek reuniting as adults. Their pasts growing up together as students at the Institute are told through flashbacks. They sought solace in each other while living under the claw of Dr. Denise Tandy. On the eve of his eighteenth birthday, Jan survives a failed suicide attempt, which gives Jan and Janis an escape route from Dr. Tandy’s clutches. However, she is able to escape justice for her abuses and other illegal activities by leaving for South America.

The intrigue and tension builds as Dr. Tandy resurfaces with another scam of epic proportions with a new victim, Antoine, to exploit. Jan has to hone his talent to identify this new player and his gift. Janis has to bite the bullet and dig into what Dr. Tandy has been up to these last forty years.

I found it entertaining to watch these two old friends interact, their dialogue was priceless. The sexual tension was strong and neither wanted to be the first to overstep the boundaries of friendship to test the waters. Both Jan and Janis were equally strong and respectful characters, one never out shined the other. There were two important secondary characters, aside from Dr. Tandy who cast her nasty shadow over everyone. Antoine reminds us of the power Dr. Tandy holds over her victims. She tears down his sense of worth with verbal, emotional, and physical abuse, however, he still feels indebted to her. Then there is Simone. She seems a little late to the party, she is Antoine’s secretary or Tandy’s office manager. She’s the only other employee and she fills both services. I really enjoyed her character, she seems impulsive and a no holds barred kind of young woman. I really liked her and so did Janis when she finally met her.

The ending is satisfying in a classy way. There were no tricks or sleight of hand, just truth. Finally, truth and justice is served. But, what of Janis and Jan? Only time will tell.