The Midas Effect by Manuel Dorado 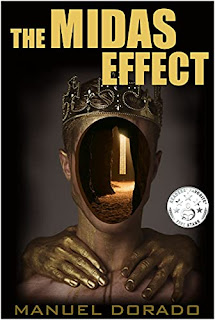 Extract from Amazon: “Miguel Le Fablec, a young European university professor, appears to have the ability to turn his imagination into reality – the so-called Midas Effect. Unaware of his power, Miguel attracts the attention of the CIA and NASA, which take him to the US and draw him into international intrigues, scientific projects and secret services operations that overwhelm his reaction capacity. Everyone wants to control and use him.”

Manuel Dorado has a background in the area in which he has set this, his first novel. Not the CIA. Hopefully. But he is an aerospace engineer. His short fiction in Spanish has won awards, and been included in a number of magazines. This is his first novel and, I think, his first translated work.

Laura Fitzgerald translated the novel. She has retained excellent page-turning quality and the English is supple and effective.

This is an unusual novel in several ways. I like unusual, which is why I was drawn to it in BigAl’s looong list of indie books looking for reviews.

For a start, it was written in Spanish and has been published in translation. So, from the outset this British reader is getting a different worldview. Spanish is not constructed anything like English. A book has to be well constructed to withstand such a sea change without reading as stilted. For this reason, I don’t usually seek out translated literature or poetry. But I had already become intrigued by this novel before realising. Still, I like being outside my literary comfort zone. It’s why I review indie books, because they are like Forrest Gump’s box of chocolates: you never know what you’re going to get. So with this.

The premise is a simple one, but one which I have not come across before in science fiction: what if you could influence events so as to have the outcome you want every time. We can all imagine ourselves having that ability, so although it is definitely fiction about science it also snuggles up warmly to the reader, as the concept is eminently graspable. What would we do with that ability? Could we control it? How would we control it? And, most importantly (as the blurb considers) what would The Powers That Be do with a person with such a gift?

I like the way certain characteristics of the people inhabiting the book are reinforced each time they take centre stage. Castillo fiddles with his tie, Gorlov has an endless supply of cheap pens which he deconstructs while he thinks. Everyone has a tic. Physical descriptions of the characters really worked for me, as with this: “Fred smiled. His Anglo-Saxon features compressed with the action, his eyes almost disappearing between cavernous wrinkles.” The descriptions are pithy and insightful, reinforcing characterisation, motivation and action. This enables the protagonists to think in really rather subtle ways. Indeed, the imagery throughout the book is a delight. I also like the lightly worn knowledge of the geographical settings that Dorado uses, in the USA, Europe and the Middle East.

So much for the characterisation, what of the plot? There is plenty of that too, despite the ‘inflection’ taking place, inevitably, inside the head of the Midas. There is danger, and chases; allies turn out to be enemies and vice versa. The page turning quality is excellent.

And, finally, it has a twist at the end which I did not see coming (and I almost always spot the twist coming).