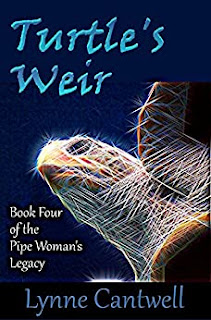 “FOCUS. Webb Curtis has a number of urgent projects on his plate. He’s supposed to be studying mediation techniques so he can help his mother negotiate a new peace agreement among the gods. He’s also supposed to be tracking down the goddess responsible for his mother’s illness – and to do that, he needs to find a new way into the gods’ realm, as the Norse Trickster Loki has locked it down while He nudges His fellow gods and goddesses toward the ultimate destruction of the Earth.

But Webb isn’t doing any of that. And he can’t remember why.

What he needs is a whack upside the head…”

“Lynne Cantwell is a contributing author at Indies Unlimited where she shares her knowledge about Indie publishing and promotion. She has a master’s degree in fiction writing from Johns Hopkins University and is a former broadcast journalist who has written for CNN and Mutual/NBC Radio News, among other places. Ms. Cantwell currently lives near Washington, DC.”

You can connect with Ms. Cantwell at her website.

This is purportedly the last book in the Pipe Woman’s Legacy series and takes up shortly after the end of Spider’s Lifeline. Ms. Cantwell expertly weaves in several pertinent elements from the whole Pipe Woman Chronicles series into this final addition. Distraction as well as the shifting of powers seem to be a major theme.

This book was a roller-coaster ride of action and heartfelt emotions. The path Ms. Cantwell took us on was well envisioned, deliberate, and developed. Several principles of the original agreement between the Gods, reached thirty-eight years ago, have been brought forward for debate to ensure Ragnarok be diverted. There are signs that Ragnarok has already begun in the Gods realm. It has been placed on Webb's shoulders to intervene. Can he avert this catastrophe before events spill over to our earthly realm?

Enkou, Hilary’s little ninja turtle, takes on a larger role in this story, helping deflect the darkness he is able to see. I really enjoyed him; Enkou is wise and clever. He says very little so when he does speak you need to listen to every word he says. I think my favorite character in this book was Roman. Ms. Cantwell outdid herself developing him. He was full of surprises, but there was still a mysterious air about him. Of course, no one will ever outshine Webb as far as I am concerned. His growth in this story was legendary.

I hate to see this series end but found the ending fitting and closed off well, sort of... as Ms. Cantwell leaves us with a couple of surprises. One made me almost laugh-out-loud with glee! Well done, ma’am. The other left my mouth agape! Honestly, how can this series end with that sort of information? I was left with so many mixed emotions. Anger at the bomb dropped on us with the knowledge that this was the end of the series, but a smile on my face and in my heart at the same time because of that same bomb. I can highly recommend this book as well as the whole series.

Turtle’s Weir is the fourth book in the Pipe Woman's Legacy series. While this book could possibly be read as a stand-alone, you really shouldn’t miss any of this fantastic series.

For those sensitive to the F-bomb, beware there are a few.

This is a lovely series. Full of interesting information about the deities of the world, a clever eco-conspiracy, characters that leap off the page and a page-turning plot. Start at the beginning and work through to this one, if you haven't met this work of Cantwell's before. There are several interlinked series, all well worth your time. If this is your sort of read, every one is an engaging read.

Thanks for dropping in and commenting. I agree this is a great series.