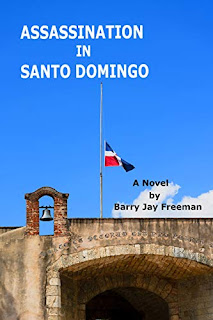 “Assassination in Santo Domingo is a combination of political satire and action/adventure taking place in the Dominican Republic, a banana republic with a blotchy history of dictators and military takeovers. It is the story of Raphael Trompero, a narcissistic dunce with autocratic ambitions and a corrupt mentality, who is elected president of the country in furtherance of a nefarious plan by Iran to gain influence in Central America. When Trompero outlives his usefulness to Iran, the Iranians decide to kill and replace him with an Iranian general. As their plan unfolds, Ari Stern, an aging Mossad agent, his wife, Leah, and their close American friends, the Bensons, arrive in the Dominican Republic for their winter vacation at the suggestion of their young friend, US Naval Ensign Sam Goldberg, who urges them to stay in his parents’ (Carlos and Carlotta Goldberg’s) palatial home in Santo Domingo (the Dominican capital). Their vacation is disrupted when they bump headlong into the Iranian assassination plot, and it becomes Ari Stern’s mission to eliminate both the plot and Trompero with the help of the cast of friends gathered at the Goldbergs’, including Sam, Stella (Sam’s Mossad agent new love) , and a dear friend summoned from US protective custody. Note: Any similarity between Trompero and a president of the United States is purely intentional.”

A retired Chicago lawyer, Barry Jay Freeman says that “writing has taken him out of the jaws of retirement and has become his full time passion.” This is his fourth book.

To say that I’m torn about this book would be an understatement.

The premise of the story is that the Dominican Republic has a president who is a “paranoid narcissist as well as a sufferer of acute stupidity.” He’s hoping to “make the Dominican Republic great again,” complains about “fake news” if the media asks tough questions or shines a light on the stupid things he does. If that doesn’t sound familiar then maybe his last name, Tromporo, and that prior to becoming president he was a casino owner will help clue you in. That the book is satirizing another president from a bigger country a short distance north and west from the Dominican Republic should be obvious to all but the most clueless reader. No doubt this will turn some potential readers off while others, myself included, will see it as a positive.

The main part of the story involves a couple story threads, one the leadership of another country who are setting Tromporo up to be their puppet and still others, the main characters in the story, doing what they can to get rid of Tromporo before it is too late. This is the thriller aspect of the story. At a high level I liked the premise of the story and the overall story line.

However, as the cliché says, the devil is in the details. In spite of being engaged in the story because the overall concept grabbed me, I found myself having a hard time reading the book for two reasons. The first is that too often it seemed like the author violated the writer’s maxim to “show, don’t tell” with the narrator telling us way too much of the story instead of allowing us to “watch” it unfold as well as taking detours into backstory about a character that wasn’t pertinent to the current story. It also seemed that the author kept repeating things the reader already knew. One example is that when the president went golfing he’d send a guard ahead down the right side of the fairway and among this guard’s duties were to retrieve Tromporo’s ball when he’d slice it into the rough and sneak it back onto the fairway. By the third time this was being explained I was getting irritated. That this happens is pertinent to the story, but the author needs to make it known and then trust the reader to remember, not remind them every time it can be snuck in.

As I said, I’m torn. I suspect some readers would be able to overlook the issues I had. If you think you’d like the satirical aspects of the story, enjoy thrillers, and think you’d be okay with those things that bothered me, give it a try.