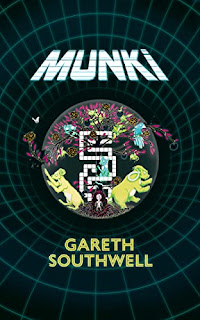 The book’s blurb describes a drier book than the one I’ve just read. It says “it is a philosophical exploration of memory, death and identity, and the ambiguous role that technology has come to play in all our lives.” I would say it’s more a romp through technologies current and imminent in a search for what humanity is going to become when it grows up. In order to enjoy this book your knowledge of computing need be no more than an awareness of the current generation of video games. Your knowledge of philosophy can be zilch – everything you need is provided on the page and explained in a interesting and accessible way. Southwell describes the book as being ‘near future fiction’. There is an argument for saying we are already there: certainly it is close enough to our own time that the covid pandemic is still messing with ‘normal’.

Gareth Southwell is a UK-based doctor of philosophy. He has a lively and playful mind, which he more usually directs towards authoring philosophy books, most aimed at ‘A’ level and undergrad students, as well as tyros and the general reader. He writes The Speculative Book Blog, in which he reviews books with a speculative element on philosophy, psychology, science, technology, history, and politics, as well as fiction with that sort of slant. See more on his website here: https://philosophy.garethsouthwell.com/ This is his first novel. In May of 2021 he released Pale Kings, a novella set in the same Merrywhile universe as MUNKi. Southwell is also the latest reviewer to join BigAl’s Books and Pals.

Southwell is a real new Renaissance author – he can do it all, from designing his cover and the look of his book, to a professional-level knowledge of artificial intelligence and neural programing, to an understanding of the philosophies which could – and possibly should – drive that sort of computing wallop, to the creation of a clever plot to illustrate where computing is going and what may happen when it gets there. On top of all that he has lightly but seamlessly absorbed the ongoing pandemic into his novel and made a feature of (literally) a bug.

All this makes the book more than usually pleasurable in a holistic sense. For example, I loved the numbers Southwell has created for each of his chapters, which pick up on ‘Snake’ a chapter head in which he describes an apparently simple computer game which turns out to be world-endingly complex: the chapter titles are fun too. I enjoyed his nicely quirky main characters, especially the way he juxtaposes them with the landscapes they inhabit (the action moves from South Wales, through London, to Venice). The whole is well spiced with a philosophical explanation of Southwell’s new world order, told with an insouciant wit, which even I (a bear of small brain) could follow and understand the jokes! To quote from the opus, the book ‘wear[s] its learning at a jaunty angle’. It would make a great movie.

Don’t get bogged down in the occasional overly complex, snakey, sentence. They can suck you in. Just move on. All will be well.