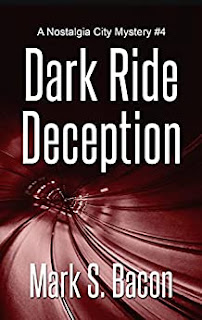 “Is Tom Wyrick Dead? The computer genius is missing. So are his priceless tech secrets. Time for Lyle to go undercover again.

Tom Wryick’s mind-bending technology will rocket Nostalgia City theme park decades ahead of the competition. But the computer genius is missing. So are his secrets. Is he dead? On the run? His billion-dollar, breathtaking discovery is the Perception Deception Effect.

An FBI agent theorizes the People’s Republic of China is responsible for the disappearance. The Nostalgia City CEO, however, is convinced a rival theme park is behind the theft. He drafts ex-cop turned theme park cab driver Lyle Deming to fly to Florida to find the missing computer scientist and recover his secrets.

Does this have anything to do with the severed human finger Lyle finds in his cab?

Back in Nostalgia City, park executive, 6’ 2” Kate Sorensen, a former college basketball star, is persuaded to investigate the death of an actor starring in a Vietnam-era crime movie being filmed at the Arizona park. Nostalgia City is a meticulous re-creation of a 1970s small town.

Shrugging off jet lag, anxiety, and oppressive Florida humidity, Lyle goes undercover using a parade of false identities to snoop behind the scenes at another theme park’s engineering and computer offices. He’s forced to jump from one covert scheme to another as his identity is exposed, his safety jeopardized.

In the meantime, Kate confronts a mentally unstable actor—fresh out of rehab. But she may be forced to give up the murder case—Lyle needs help.

Kate and Lyle have little time to explore their nascent romantic relationship as both their investigations turn deadly, threatening them and the future of Nostalgia City.”

“Mark S. Bacon began his career as a Southern California newspaper police reporter, one of his crime stories becoming key evidence in a murder case that spanned decades.

After working for two newspapers, he moved to advertising and marketing when he became a copywriter for Knott’s Berry Farm, the large theme park down the road from Disneyland. Experience working at Knott’s formed part of the inspiration for his creation of the Nostalgia City theme park”

The place most of this story takes place, a fictional theme park called Nostalgia City, is almost as much of a unique character as the human characters. The uniqueness of the park and what that adds to the story, even more so given that the park is being used as the set to film a movie at the same time, adds a lot of out-of-the-ordinary places, people, and situations to this story. The story also has multiple people trying to figure out different mysteries that may or may not be related to the main mystery of where Tom Wyrick has gone and how to recover the tech secrets he is assumed to have taken with him. These multiple threads keep things moving along at a fast pace as the reader tries to figure out, along with Lyle, Kate, the sheriff, the FBI, and others, how it all relates.