Today we have a guest post from Morgan C. Talbot, author of First to Find, which we reviewed last week. Be sure to enter the giveaway at the end of her post. (Additional giveaway details and other stops on her blog tour can be found here.) 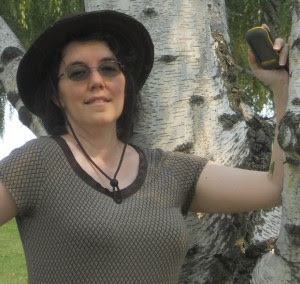 Have you ever been the poster child for anything? Embarrassing sports injuries, soda addiction, wallflowerism? If you got returned to your childhood and decided what issues your young life would involve, what would you pick? Would it be all rainbows and candy, or would you allow some hardship to force you to grow and learn earlier than your friends?

I was the poster child for nerdiness all throughout elementary school. My classmates would ask me to help them with their work three seconds after the teacher finished explaining the assignment. Otherwise, they didn’t really hang out with me. I was pretty lonely, and to make up for it, I spent a lot of time writing poems, reading books, and imagining having more friends or that the boys I liked returned my affections. That sort of thing. As a result of my years of loneliness, I have an imagination that literally won’t quit.

I was the quiet kid at school, watching the others, trying to understand why I didn’t fit in. I spent years examining the unvarnished motives of young humanity. Pretty much every character trait or motive or plot twist can be boiled down to something that elementary school kids struggle with.

When the neighbor kids played tug of war and I accidentally ended up with a bloody nose and a split lip, it taught me that reversals of fortune can happen without any villains being present. When two classmates laughed at me at school for my swollen lip, I realized that even allies can have serious character flaws. When the skinny little school bully picked on me in the seat right behind the bus driver and no one stopped her, I learned that authority doesn’t always act when it should, and the task of setting things right can fall to a reluctant hero (my shy father). When the boy I was crushing on wrote me a love note because his friends persuaded him to as a prank, I experienced that sudden high/devastating low that can break the spirit of a weaker character, and I realized for the first time that those we love aren’t always worthy of it.

Both of my main characters in First to Find experienced traumatic childhood events that helped form the people they become as adults. Bindi suffered abuse and neglect, and has become devoted to the safety and welfare of small children, despite her devil-may-care exterior. Margarita nearly died of a tropical disease on a trip with her father, and is haunted by the thought that Death is personally taunting her by stealing others from her life, as revenge for her earlier escape from his clutches. They’re good, strong female protagonists, feeling their way through an imperfect world, relying on what they’ve already learned to help them through their next challenge. And they’re going to need it. We all do.

We’re all flawed. And we’re all poster children for something.

I love your post and insight today. I probably could define myself as the poster child for nerdiness too. I never knew quite how to fit in. I was definitely picked on and made to feel very lonely and awkward. Something interesting happened to me a few years ago though, I read an article on how my childhood bully had been brutally murdered after she tried to scam some guy. It really made me think about how I did have a blessed childhood because I grew up with a great family and went on to have a really great life which it sounds like she did not. I wouldn't trade away those years lonely and awkward years because I am so happy of where I ended up today. It sounds like you have a similar experience channeling those years into your writing today

Thank you again, Al, for your participation in the FIRST TO FIND blog tour. I really appreciate your time and attention!

@Shannon Ro: You're exactly right. It's hard to learn any life lessons from afar. Unless they get up in our faces and stamp their effects on us pretty hard, they don't really take. I wouldn't trade any of my childhood experiences for anything. We get what we get, and we don't get upset. :) We just move forward and do our best.

Thanks for the comment, Shannon. I'm way past my childhood (ask my grandkids and they'll tell you I'm REALLY OLD), but this post really struck home for me. It's one of the better guest posts I've had.

Awesome guest post BigAl, thank you Ms Talbot for sharing such intimate details and insight into the human condition. Great blog post, I hope your book does well.