A Not-Really-a-Guest Post from Keith Nixon, author of The Fix 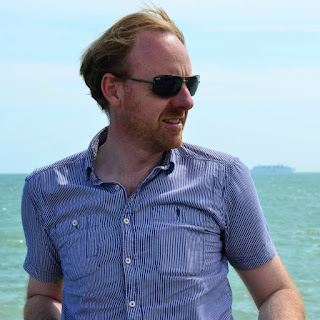 I read an article recently that said the best-selling genres in 2012/13 have been romance and crime – unfortunately (and quite typically) I can’t now lay my hands on these words. As a male of the species, my literary tastes skip right past the former and onto the latter. What is certainly true is two of last year’s most successful books - Fifty Shades and Gone Girl - were originally independently published, as was Hugh Howey’s Wool. Change is well underway in the book industry, although you’d have to have lived in a cave for a few years not to have noticed this.

My tastes have changed over the years. When I was a kid I devoured mounds of sci-fi (Asimov, Moorcock, Harrison, ScottCard) and then shifted to thrillers (Ludlum, Maclean, Forbes). More years ago than I’d like to recall my wife (ok I confess I wasn’t a kid by then) bought me three Ian Rankin books for Christmas after I’d read an article (another one) on him. Which opened up crime.

I’m into crime in three arenas – as a reader (the place we all start, of course), a writer (having dabbled originally in comedy and historical fiction) and most recently as a reviewer for Al. Other than getting married and having kids (I say that because my family will likely pick up this article) these are my three favourite things in life and I count myself very lucky to be involved. One followed the other, sort of, and these days they are interlinked and indispensable. Why crime? I’ve no idea. Why do I like tomato ketchup and the next person hates it? It’s just taste. Okay, that was a cop out… Joke not originally intended.

I’ll assume everyone who reads Al’s blog is a reader so in this post I’ll concentrate on why reviewing?

Well, it was somewhat a happy accident. Having self-published my book (The Fix, available in a few good bookstores) I was looking for an approach to widen my reach and knowledge of the industry. Endlessly tweeting into the social webosphere was frankly wearing (I use  Facebook much more these days, feel free to look me up) and it was rare to get much back from all the digital shouting (still is). By pure chance I happened across Books & Pals and sent Al an e-mail. Within days I was reviewing self and independently published books.

This latter point is also important, so please allow me a moment’s diversion. I’m a big believer in the little guy. I like to see the underdog win. I like to see change. My day job (most writers earn next to nothing) is all about change – I’m involved in transitioning traditional, analogue industries across to digital processes. Ironic really.

As alluded to previously, this upheaval is also underway in the book industry. The big houses still have their place, and always should, but there’s a shift in the landscape. Authors that wouldn’t have gotten a bite from either agent or publisher   a decade ago, are now in ‘print’. And we should all rejoice at that fact. Last Christmas I stood in a large national bookstore chain and looked at their top 50 books. Over half were by celebrities, many others were cookbooks. It was depressing. Go to an e-book store and the choice is huge. And therein lies the problem.

It is regularly said (far too often I think) that everyone has a book inside them. Really? Well, maybe. But… not everybody wants to write a book. Of those that do put finger to keyboard many simply aren’t capable of effectively communicating the story in a fashion that captivates the reader. So, you could argue most people’s books should stay exactly there – inside them. This explosion of self-publishing means there are a lot of new books bouncing around in the world. The Amazon UK Kindle store says it contains 2,262,348 items with 198,382 added in the last 90 days. That’s some growth.

And that’s where ‘why review’ comes in. Or one half of it, at least.

My (self-imposed) role in reviewing (although Al does scare me) is to tell readers of this blog what is worth reading and what isn’t, but crucially why - with the caveat that this is a personal taste aspect (which I’ll always attempt to qualify). I will also state clearly what I do and don’t like about a story and often pepper my review with examples of the writing. The ultimate purpose is to let you, the blog reader, decide. I’ll also point out format or technical errors because I see no excuse for these.

There are a couple of outcomes from reviewing. Not everyone has liked my assessments. I’ve had negative feedback from a couple of readers as well as writers. But – bad reviews are part of being an author, we all get them.

Another is there are strata when it comes to writing ability. Some authors are not so good and will more than likely never progress. A large chunk are in the middle. They are okay and may or may not progress, but there are a relatively small number that are up there, high quality writers. Most of these in the latter segment tend, over time, to get indie deals or transition into traditional publishing deals.

Which leads to the other half of why review. I’ve learnt a huge amount. I’ve seen good, bad and indifferent books. It’s taught me a lot about the craft of writing for the reader – Hugh Howey of Wool fame said something similar.  And I’ve made some fantastic contacts in the writing and publishing world. It’s a very competitive market, but ironically not between the authors themselves. The people I now know (in crime) couldn’t be a nicer bunch and are always willing to help with promotion and advice. Ultimately that’s what makes the world go around. People helping others.

Long may it continue.

Excellent post Keith, I have enjoyed your reviews. You have a style that I would like to be able to emulate. I feel the tides turning also, do I see romance and chick-lit in your future? You have sampled all the other genres so it is just a matter of time. :P