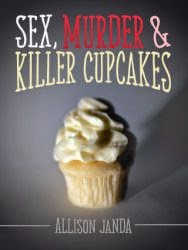 Allison Janda says, “I was a pretty boring kid. I was also a fairly run-of the-mill
teenager. I never snuck out to parties. School sporting events were beyond my understanding. I was constantly lost between the worlds of books and theater. In college I majored in Journalism, which would eventually seal my fate. I wouldn’t realize it for another seven years or so.”

To learn more visit her website or check out her Facebookpage.

“She may be a crime-scene photographer, but that doesn’t mean Marian Moyer is ready to star in her own murder mystery. Most days, she can’t even control her hair.

But when the star of Marian’s racy, underground magazine turns up dead and the police are convinced she’s the guilty party, it’s up to Marian to find out who really did it before it’s too late.

While danger isn’t exactly her middle name, there’s plenty to go around, especially when Marian begins to suspect that her long-time man crush is behind it all.”

Marian is headstrong, naïve, and has an active imagination. When their best model turns up dead in the dressing room all the employees are considered suspects in the case. Barry, a Milwaukee detective on the police force is also a longtime friend, and Marian uses this connection to find out how the investigation is coming along. Her father is also an ex-cop who sticks his nose in to follow developments in the case which seem to be causing Barry some problems. When Marian catches an old high school flame, James, stalking around her apartment building parking lot all of her suspicions are directed toward him. Addison puts her investigative reporter hat on and decides Marian needs to get closer to James to see if he is involved with the murder.

Marian is nervous about being wired and going on a date with James, but does it since she’s been assured that her friends will be close by. When she catches James being his old hound dog self, flirting with a younger woman when she went to the restroom, she explodes and ends the date. She does however let him take her back to the office building to get her car. He drops her off at the front of the building not realizing her car is in the back parking lot. The temps are cold so she hits her remote start when she gets to the edge of the parking lot and her car explodes. Now she knows someone is out to kill her. It’s personal, not something against Food Porn.

This is an easy, enjoyable read and despite sex being in the title, this could be enjoyed by young adults. So, if you are looking for sexy scenes, you won’t find them in this book. The story is told through Marian so we know everything she knows. The secondary characters are well rounded and entertaining, especially Marian’s parents. There are some interesting plot twists and a couple of red herrings thrown in to divert your attention to details, and I was caught off guard by the killer. I am sure the author considers that a plus.

I came across no significant issues.