Review: Climb Beyond the Crest by Don Defreeze 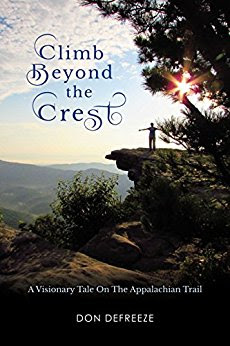 “Separate yourself from the world’s hectic whirlwind and become part of an Appalachian Trail hike into enchanting wilderness. Buy into Don Defreeze’s personal narrative and be ticketed on a journey to supreme acuity. The thread is the hike while various trail segments jog thoughts ranging from philosophical to the practical, almost a discussion of reality’s nature. These ideas collectively create a frame of reference which walks the reader into symbiotic solitude and a personal challenge.”

Don Defreeze is a wilderness guide and owner of a guide service called Exchiking in Roanoke, Virginia.

It’s tough to figure out how many of my complaints and issues with this book are valid complaints by any reasonable criteria and how much is “just me” based on taste, misplaced expectations, or something else. I’ll talk about them all and you can decide which might matter to you.

The first issue is the less than adequate copyediting and proofing job this book received. It was clearly lacking in this regard with missing or wrong words, homonym errors, and misspelled names, among other issues.

I also found the author’s writing style to be pretentious. It felt like rather than attempting to communicate his thoughts as clearly as possible that he instead wanted to impress someone by stringing together several obscure, seldom used words in a row. To be clear, there was nothing wrong with any of the words, but rather than using the perfect word to illuminate a thought more clearly the overuse of these words obfuscated the message instead. Here’s an example:

I can’t help or hold back a teary-eyed reaction to the emotional euphoria the John Denver song generates. While viewing the amazing scenery, my uplifted spirits share a remorse for the irreparable failure of mine to journey out into this realm during the lost, destitute years I spent filling the days subsisting within the Human Tree. Even the thrust of late to catch up with the wilderness experience has been besieged by economic objectives perceived to be more important, and I hang the loss of adventure on being hood-winked into chasing unessential goods.

Nothing wrong with any of those words, nor are any of them out of most of our vocabulary, yet the way they’re strung together feels like a whole lot of work to extract the meaning, at least to me. As a side-note, the long chapters (at least they felt long) with very few breaks within the chapters to create natural stopping points, gave me what I’ll call reader fatigue, trying to get to a good stopping point.

Last, after reading the book, I’m still left uncertain what the author’s message was intended to be. I’ve read literally hundreds of books based on a travel experience, probably forty or fifty of them based on a hike of some kind. These usually have two levels, the adventure of the experience and the lessons the author learned from the experience. It was apparent from the way this book is presented in its description that the author intended to focus more on the latter than is typical for these books, and that’s okay. At times I felt like I was being told what the lesson I should take away from the story was, rather than the story leading me to figure it out on my own. At other times I felt like I was completely missing the point. On this point, possibly other readers would react much differently. I just know it didn’t work for me.

Lots of copyediting and proofing issues that snuck through to the published version. These include missing or wrong words, homonym errors, misspelling of names (both people and song titles), and other sundry problems.