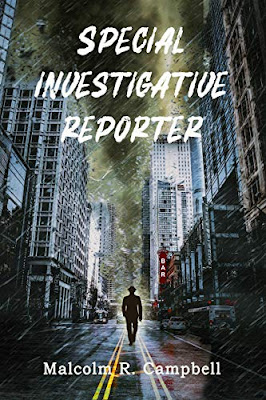 “In this satirical and somewhat insane lament about the fall of traditional journalism into an abyss of news without facts, Special Investigative Reporter Jock Stewart specializes in tracking down Junction City’s inept and corrupt movers and shakers for his newspaper The Star-Gazer. Since Stewart is not a team player, he doesn’t trust anyone, especially colleagues and news sources. Stewart, who became a reporter back in the days when real newsmen were supposed to smoke and drink themselves to death while fighting to get the scoop before their competition sobered up, isn’t about to change. Stewart’s girlfriend leaves him, the mayor’s racehorse is stolen, people are having sex in all the wrong places (whatever that means), and townspeople have fallen into the habit of sneaking around and lying to reporters and cops. Sure, everyone lies to the cops, but reporters expect gospel truths or else. Stewart may get himself killed doing what he was taught to do in journalism school, but that’s all in a day’s work.”

His fantasy novels were inspired by Glacier Park Montana where he worked as a bellman and from a tour of duty aboard an aircraft carrier during the Vietnam War. He grew up in the Florida Panhandle, a wondrous place often called ‘the other Florida’ and ‘the forgotten coast,’ that was the perfect environment for growing up and learning about writing and magical realism. Campbell lives on a north Georgia farm with his wife, Lesa, and their two cats.”

Jock Stewart is an old school newspaper journalist. When a crime is committed he goes out looking for the truth. And the whole town seems to be suspect. To top that off Jock is having woman problems. Jock is a wise-cracking, smart ass, full of sarcasm but relatively comfortable in his own skin. Except where women are concerned. There he seems clueless and second guesses himself. The plot is twisty curvy, like the women in Jock’s life. Jock’s internal dialogue and narration gives the book a noir feel.

The important characters are well rounded. Like the donut eating sheriff whose name happens to be Kruller. There are some minor characters who are stereotypical of small town’s low-life that add humor to the story. At times the sheriff and his deputies seem inept. And the newspaper’s upper management is losing its sanity, or is it a ploy to save their necks? No one seems to like the idea of taking the paper into the digital age.

Here’s a sample of Jock’s clever dialogue. The deputy was explaining how they arrested one of the suspects:

“That son of a bitch had fallen asleep in the can with his .38 lying in the sink.” “What was it lying about?” asked Jock.

Then later in the book some of Jock’s inner dialogue:

Jock had never heard Marta gush before and found the sound rather unsettling like a stopped up toilet overflowing.

It’s a fun story with a clever plot, full of red herrings to keep you guessing. And a bit of romance to boot!

Sex is behind closed doors, and some adult language.

A small number of proofing issues