Review: Woman of His Heart by Donna Fasano 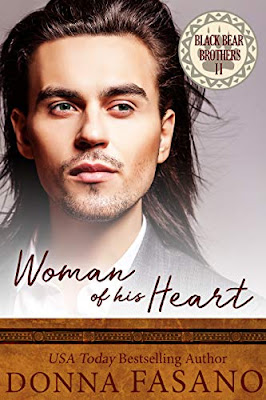 “Dr. Dakota Makwa’s man-hunting female patients are on the prowl—and he is their prey! The handsome Native American has had enough. He comes up with an unusual proposition for his nurse, Lyssa Palmer, who is facing problems of her own—an unborn baby she wants to protect from her wealthy and powerful ex-husband.

The marriage of convenience between the sexy Kolheek doctor and the pregnant nurse quickly turns into a heated affair. But both Dakota and Lyssa carry some heavy baggage that threatens their happiness. Will their fiery union prove strong enough to heal the wounds of the past and convince them to trust in their newfound love?”

Doctor Dakota Makwa has returned home to Misty Glen to build a new medical practice on the reservation after a soul crushing failed marriage. As a new handsome doctor in town, he is being besieged with inappropriate advances from his female patients. Dakota also harbors a deep distrust of women, not only from his failed marriage, but an anger from his childhood.

Dakota is the younger brother of Mat Makwa who was featured in book one of this series. Both were raised by their grandfather, Grayson Makwa, the tribe’s shaman. They were taught to respect their native heritage and above all else, live an honorable life. What they didn’t have, as I saw it, was a strong female influence in their lives.

Dakota hires Lyssa Palmer as his nurse, and he’s hoping she can help curtail some of his feisty female patients. Lyssa is also a complicated character., She had a difficult childhood and fought to go to nursing school to better herself. Now she is trying to escape a loveless marriage from her rich and powerful ex-husband. Lyssa is trying to rebuild her life with a new set of values.

Lyssa is a smart, strong character who is trying to maintain her dignity in a difficult situation. Dakota is a stubborn, arrogant, man who spends too much time in his head. He thinks he knows what he wants, but doesn’t have a clue. The dance these two are in is emotional, sexy, and frustrating. I can’t tell you how many times I wanted to whack Dakota upside his head and yell WTH in his face.

I am enjoying getting to know the characters in The Black Bear Brothers Series. And I am looking forward to learning more about the mysterious Chay Makwa. All we know is that he is deeply troubled.

Woman of His Heart is book 2 in Ms. Fasano’s, The Black Bear Brothers Series. While book 1, An Honorable Man was a sweet romance, Woman of His Heart, steps out from behind that closed door. In other words, Ms. Fasano added some passionate sex scenes. However, they are not overly graphic, and are tastefully handled.

The books in this series are stand-alone novels, but reading the books in order will offer the most enjoyable experience.

Go ahead and whack Dakota. It's okay with me... just so long as you liked the happily-ever-after! lol Thank you for reviewing WOMAN OF HIS HEART!

Oh, I did whack Dakota several times! And I did love the HEA, Dakota redeemed himself, though I did have concerns for a while.

Thanks for dropping in and commenting, Ms. Fasano.