Review: Shadow of the Jaguar by D.V. Berkom 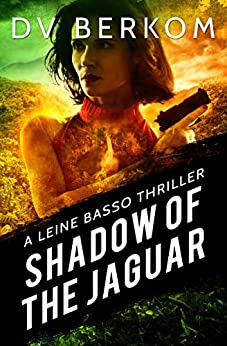 “A lost civilization. A woman's abduction. The promise of unimaginable treasure.

Deep in the heart of the Amazon, an expedition finds evidence of a fabled lost city of gold. It isn't long before a ruthless drug trafficker learns of the possible find and kidnaps an expedition member, threatening to kill her and the rest of the expedition unless he's given the coordinates to the city.

Former assassin Leine Basso and her daughter are called in to rescue the kidnapped woman, who also happens to be a good friend’s niece. But in the jungle, danger lurks at every turn, and nothing is as it seems...”

The Leine Basso books are based on a foundation that has no many layers that make for some intense stories. Leine currently works for SHEN, an organization that is fighting human traffickers all over the world, which has had her at different times involved in cases on several continents, urban areas in the US, or the not-so-urban Dakotas. Her past as an assassin, not necessarily doing good, is contrasted with her current life, where she might sometimes do things that most wouldn’t consider good, but she’s always doing them in a battle for good to overcome evil. This dichotomy in her past and present or sometimes even between her goals and her actions to move towards those goals are interesting and thought provoking (not to mention making for an action-packed story).

In this particular story, April, who is Leine’s daughter and has been training to follow in her mom’s footsteps, is assigned to the case along with Leine. This adds another layer of stress as Leine has faith in April’s skills, but things can always go wrong and she’s still April’s mother, so the push and pull of those things adds still more tension whenever things start to feel dangerous. As I’ve come to expect from the Leine Basso books, I was kept guessing as to what was going to happen, on edge, and couldn’t put the book down as I wanted to know how it was going to turn out. That’s what I’d consider the ideal reaction to a thriller.

Thank you for the spectacular review, BigAl! I'm stoked that you enjoyed Leine's latest :-)

You're welcome, DV. Leine seems to always make for a fun read.