Review: GenderQueer: A Story From a Different Closet by Allan D. Hunter 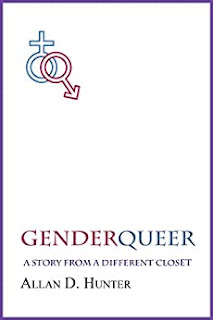 “Derek is a girl. He wasn’t one of the boys as a kid. He admired, befriended, and socialized with the girls and always knew he was one of them, despite being male. That wasn’t always accepted or understood, but he didn’t care—he knew who he was. Now he’s a teenager and boys and girls are flirting and dating and his identity has become a lot more complicated: he’s attracted to the girls. The other girls. The female ones. This is Derek’s story, the story of a different kind of male hero—a genderqueer person’s tale. It follows Derek from his debut as an eighth grader in Los Alamos, New Mexico until his unorthodox coming out at the age of twenty-one on the University of New Mexico campus in Albuquerque. This century’s first decade saw many LGBT centers and services rebranding themselves as LGBTQ. The “Q” in LGBTQ is a new addition. It represents other forms of “queer” in an inclusive wave-of-the hand toward folks claiming to vary from conventional gender and orientation, such as genderqueer people. People who are affirmatively tolerant on gay, lesbian and transgender issues still ask “Why do we need to add another letter to the acronym? Isn’t anyone who isn’t mainstream already covered by ‘gay’ or ‘lesbian’ or ‘bisexual’ or ‘trans’? I’m all in favor of people having the right to call themselves whatever they want, but seriously, do we need this term?” Derek’s tale testifies to the real-life relevance of that “Q.” This is a genderqueer coming-of-age and coming-out story from an era long before genderqueer was trending.”

“Allan D. Hunter lived in New Mexico from 1973 to 1984 before emigrating to New York to become a gender activist. He received a degree in Women's Studies and graduate degrees in Sociology and Social Work and worked with psychiatric patients' rights groups and gender identity support groups. He later served as elder abuse case worker in the Bronx. His truncated academic career included publication of a short but groundbreaking theory piece, 'Same Door Different Closet: A Heterosexual Sissy's Coming-Out Party' in a peer-reviewed journal, Feminism & Psychology. The original manuscript for this book received an award in a Cisco Writers Club competition.”

Old straight cisgender guys like me grew up viewing the world, or at least the people in it and some of the ways we defined those people as a few binary choices. You were a boy or a girl. If you wanted sex it was either with the opposite gender or your own, with one of those generating a lot of paranoia (aka homophobia) among my high school classmates. Sex and gender were the same and viewed as entirely dependent on your physical characteristics. Allan Hunter, the author of this book, grew up in the exact same time, knew he didn’t fit those parameters, but for a long time struggled with what that meant. This is his story.

This is a memoir, even though the main character in the story is Derek Turner, the preface makes it clear that this is Hunter’s story, but he has changed the names of the characters (himself included, apparently) and in some instances may have combined a few characters into one for ease of telling his story, but this appears to be what he sees as his truth. I found myself being sympathetic with him at times, realizing that while I don’t see myself in the same way (a girl on the inside, a boy on the outside), that some of the stereotypical male traits that Hunter doesn’t have, I don’t either, and some of the expectations he had issues with as a kid, I did as well. This helped me understand that many things we try to view as binary with only 2 choices is actually more of a spectrum with different people falling in different places on the spectrum, only those at the more extreme ends fitting the traditional binary choices.

Society has gotten better at describing and acknowledging the many differences in people where sex, gender, and sexual preferences are concerned, but I realized that I didn’t have as good a handle on some of those possibilities. LGBT, I get, but if you’re in that Q+ that gets appended by some people, what does it mean? After reading GenderQueer, I feel like I’ve got a better handle on it.

Some adult language and adult topics.