Review: The Wrong Side of Murder by Jeff Buick 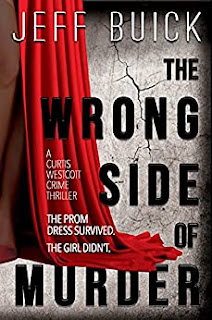 “Prom night and Darina was having a great time – until someone killed her and stuffed her body in a wall.

Now, twenty years later, Boston homicide detective Aislinn Byrne is staring at her friend’s dehydrated body, draped over a chunk of broken drywall. For two decades Aislinn wondered what happened to Darina – how and why she disappeared without a trace. Aislinn works the case hard, but it’s a convoluted path to the truth. Darina’s father, Alexi, was running organized crime rackets and was murdered six months before she went missing. The obvious question boils up to the surface – are the two murders connected – and if so, how?

Curtis Westcott, head of Boston Homicide, reopens Alexi’s unsolved murder and that puts him head-to-head with a trifecta of powerful gangsters. It’s a wall of silence, but Westcott gradually begins to peel back the layers. As he and Aislinn share information and both investigations move ahead, one thing becomes clear – the killer is still out there and watching their every move.”

A resident of Calgary, my favorite city in Alberta, Jeff Buck writes mysteries, thrillers, and crime fiction. The previous installment of the Curtis Westcott Crime Series won an award from the International Thriller Writers in the Best Original Ebook category in early 2021.

The first chapter of this book chronicled Boston police detective Aislinn Byrnne’s visit to a crime scene. Remodeling in an office building uncovered a dehydrated body stashed inside the wall. When Aislinn gets a good look at the body she recognizes it is Darina, a friend of hers who disappeared twenty years earlier on the night of their senior prom. That first chapter grabbed my attention and I had little doubt this was going to be an intense, interesting read. It turned out even better than I expected.

I’ll try to be vague so as to not spoil the story for anyone, but once Aislinn’s boss is convinced that her relationship with the victim isn’t going to be an issue, she starts digging. As you might expect, things hit close to home with her reliving prom night over and over, evaluating everything that happened prior to Darina’s disappearance, questioning their group of friends, and trying to figure out what happened. Her dad and a couple of his friends who are retired police officers help Aislinn in understanding some of the things going on in the city twenty years ago that a high school girl wouldn’t have been attuned to. In the end, what she uncovers isn’t at all what I’d have guessed at the start of the book, but the road getting there was an intense story that kept me on the edge of my seat the entire time.

Although the second book in a series, reading of the first in the series isn’t needed in order to