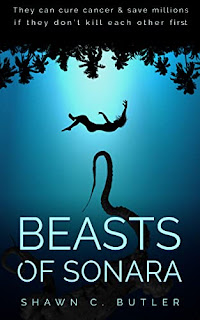 “Tourist Raymond Molina finds the body of a young biologist in a Costa Rican bay—apparent victim of a shark attack—but no one knows how she got there. As Ray searches for what really happened to her, he stumbles onto the best kept secret in the natural world.”

Shawn C. Butler is the author of Run Lab Rat Run, the first book in the Modified series about genetic engineering, human modification, and our often violent search for immortality. He lives in Southern California. You can visit him online at his website or on Twitter. You might even find him out running the trails of San Jacinto when he’s not injured like the natural he is.

The Beasts of Sonara is, for a large part, a stylishly written novel that starts with a heart-racing battle of a surfer against a giant wave and the discovery of a severed head. It is liberally splashed with fine prose: “You could sit by her infinity pool and watch the ocean distort space and time until the sun swelled into a fat red eye at the edge of the world.” “The ocean was an intimate whisper of tiny waves on warm, golden sand.”

The initial rush, however, soon turns languid, and the woman’s head becomes the object of an emotionless search for what happened to the victim. There is a secret to the head that might have had global consequences, except that it didn’t, and the threat had ended before the victim died.

The story presents no tension except in the sense of a soap opera. Maybe something will happen in the next episode or the next chapter. Thousands of words are spent on describing relationships that don’t really lead to anything. The protagonist’s lover is at times distant and at times warm. There is no hint, until the end, of her true feelings, which are inexplicable. The writing devolves into: “Damn it,” I said. “How did you know? Wait…” I thought I had it. “Izzy told Harry, Harry told you, you told Karla, and now everyone knows.”

And this: “Alone. They said such strange things. We are all alone. The world is alone. The sea is alone. We are always alone, even when together. How can I not leave you where you are? But I stayed. The waves rose and fell and we with them, one and together and alone.” This is the musing of a sentient octopus, but still the writer could have given it a less awkward voice.

There are several attempts at aphorisms that fall short of folk wisdom. “Maybe love was time. If you didn’t know yourself, you couldn’t know past or future, only now. We are all alone, but love was the short time we were alone together. Love was sharing time.”

One character is revealed as gay, with no indication of why it matters to the story, because it doesn’t. There are references to Japanese aesthetics wabi, sabi, aware. The author quotes several poems including one by Hakuin Ekaku about a monkey that seems intended to reflect a giant howler in the novel. On reading Ekaku’s poem, I felt the novel was a massive choka, strong on aura, but without the form, the substance or the tension one would expect from Japanese poetry.

The story doesn’t so much come to a satisfying resolution as the author simply and mercifully stops writing.