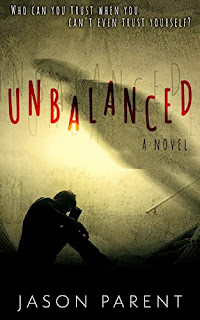 “By-the-book Detective Asante Royo can only clean up Fall River’s filth for so long without getting dirty. When he’s called to an apparent suicide at an apartment complex notorious for its prostitution and drug trade, he doesn’t shed a tear for the life wasted. Yet something about the scene haunts him, and when his investigation gets swept under the rug, he has a hard time living with the stain.

Jaden Sanders is an unstable loner who lives across the hall from the crime scene. When three men break into his apartment, Jaden is ready for a fight. He kills two of his attackers in self-defense then stalks and stabs the third in the back. Jaden is soon arrested for murder.

With no clear motives for the home invasion or Jaden’s violent response, Royo must uncover the true story before more people get hurt. His only leads are derived from the version of events extracted from a truly unbalanced mind. Is Jaden a victim being steamrolled by cold justice or a murderer capable of killing again?”

“In his head, Jason Parent lives in many places, but in the real world, he calls New England his home. The region offers an abundance of settings for his writing and many wonderful places in which to write them. He currently resides in Rhode Island.”

As the description explains, there are four deaths and two different cases that detective Asante Royo is working on in this story. One of these is a case already closed as an apparent suicide, yet that resolution never sat quite right with Royo. Then this new one, borderline in some respects, but a case of three dead that he sees as a valid instance of self-defense, in spite of what the prosecutor says.

This was an intense story that kept me guessing, as I’d hope from this kind of tale. Even when I thought I knew who had actually done what, there was still a question as to whether the ending would be satisfying, which kept me engaged. But what set this book apart from many I’ve read was that those I perceived as the good guys (or gals) were much more flawed than the stereotypical good guy, sometimes crossing lines I wished they hadn’t. At times I found myself sympathizing with the bad guys (or those I perceived as fitting that category). At least a few of the characters kept me guessing as to which category they actually belonged in. Then the ending had a twist I’d have never predicted which brought us to a conclusion I by then expected although with no idea how we were going to get there. What a ride.

Review based on an ARC (advanced reader copy), so I can’t judge the final product in this area.