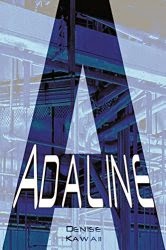 Denise Kawaii resides with her husband and son in Portland, Oregon. In addition to writing books, Denise manages a paintball shop and gets out on the field to play as often as possible. She has three titles currently on the market. Age/Sex/Location: Love is Just a Click Away is a contemporary romance published by Brighton Publishing. A Giraffe in the Room is a novellette of Medical Fiction and Adaline is Kawaii's top selling YA Science Fiction.

Denise is currently writing Adaline 2.0 (sequel to Adaline), and a thriller titled Serial which will be released under the name D.K. Greene. Both titles are expected for release in late 2015..
Description:

Adaline is Huxley’s Brave New World on steroids. The novel takes place inside a huge building that is managed by machines in service of “The Community.” All the human inhabitants (at least all that we meet) are male and cloned from the same genetic material so they look more or less identical. The story focuses on eight-year-old-boy #62 (the populace uses numbers not names). Through his eyes we learn how Adaline trains its citizens.

One of the most enjoyable aspects of reading indie works from Big Al’s long list is that occasionally I stumble across a story that is quite different from anything I’ve experienced before. Adaline falls firmly into that category.

#62, it turns out, is physically similar, but internally different from most of his “brothers” in that he dreams and has an unfettered imagination. This puts him at odds with those who control The Community, amplifies his stress levels because he has to come to terms with being not-the-same (which makes him a “bad boy”), but also gives him scope to mentally escape the tightly restricted world of Adaline.

Because it’s such a linear story, there’s not much by way of detail that I can reveal without providing spoilers.

I thought it a fascinating concept, and I enjoyed the novel. I did find it a little slow and repetitive in parts, but I also appreciate that the author was walking a fine line because the world of Adaline is repetitive—that is the very nature of machines.

Email ThisBlogThis!Share to TwitterShare to FacebookShare to Pinterest
Labels: 4 Star, fiction, Sci-Fi, YA