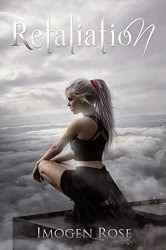 Globetrotter Imogen Rose is Swedish by birth, went to college in London (where she received a PhD in immunology), and is now a Jersey girl. After her eight-year-old daughter insisted she write down her stories, Rose wrote the first of her Portal Chronicles series and decided to let it out into the world. The response was so positive that she’s continued writing. With the addition of this one she now has ten books available, plus foreign translations of many.

“Ever since Bloody Fall, humans have lived in fear.

Even though the apparently senseless massacres have ended, President

Elizabeth Ryan's administration has been under a cloud of disapproval for failing to bring the terrorists to justice.

She braces herself as a new spate of carnage is unleashed.

Cordelia and Faustine are recruited back into action as the supernatural agencies go on high alert. Has their nemesis re-emerged?”

After reading Retaliation I started pondering what it is about The Bonfire Chronicles series that has set it apart from other series I’m reading or have read. I realized that the majority of my series reading has been mysteries of some sort, either detective or police procedurals, with the same characters doing the same basic thing each book, even though each “case” may be unique enough in the specifics to keep it feeling fresh. Less common are other series where each book builds on what happened previously. But even among those, Rose’s series stands apart in that she reveals more and more detail of her story world, making it more complex with each new installment. In the beginning, with Faustine, the reader was exposed to Rose’s supernatural world and given a glimpse of the governing bodies that exercised control over the supernaturals, but at its heart it was teen drama (even though the teens are strange creatures, like wanderers or those obnoxious trolls).

Each book introduced a few more characters, and the reader learned more about the world. We also went from plots that were amped up high school infighting (the cliques were just formed based on what kind of supernatural being you were) progressing to a major uprising among the world’s supernatural community, to Retaliation, where the conflict within that world is slopping over much more into the human world. The complexity of the world and plot, plus the intensity of the conflict continues ramping up. It keeps me coming back, wondering what is going to happen next.

While some backstory is given as needed, I’m not sure whether someone who hasn’t read the series thus far would follow everything going on, but they might. However, I did find the backstory helpful in reminding me of the important things leading up to this book since there was a significant time gap between this and the prior book in the series.

My review is based on an advance copy and I can’t gauge the final product in this area.

Email ThisBlogThis!Share to TwitterShare to FacebookShare to Pinterest
Labels: 5 Star, fiction, paranormal, YA

Thanks for the awesome review! I am thrilled that you enjoyed it. :)

"The complexity of the world and plot, plus the intensity of the conflict continues ramping up. It keeps me coming back, wondering what is going to happen next."

Congratulations on your new book, Imogen.