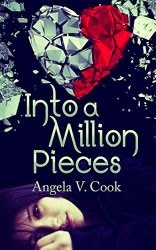 “Angela V. Cook lives a very unexciting, but never boring, life with her husband and two children just outside of Detroit. Like most writers, she's been making up stories for as long as she can remember and can't imagine a life that doesn't involve creating worlds.

Angela loves to write novels for teens because it's the best outlet for her sarcastic personality, immature sense of humor, and love of romantic firsts. Her idea of the perfect day involves a quiet house, a good book, and a piece of cheesecake. Or two.”

“Allison McKready is a succubus. So is her twin sister. But while Allison spends her summer break hiding in the library behind her Goth makeup, Jade fools around as often as she can. Allison can’t believe Jade would ignore their mother’s fatal example so recklessly, but concealing a cursed bloodline and its dangerous effects is far from Allison’s only problem. Mean girl Julie’s snob mob is determined to ruin her summer, and Aunt Sarah’s Bible thumping is getting louder. Only her new friend, Ren Fisher, offers safe haven from the chaos of her life.

When one of Jade’s risky dates leads to humiliation and sudden tragedy, Allison reels, and Ren catches her. But as her feelings for him grow, so does her fear that she’ll hurt him—or worse—in an unguarded moment. The choice is coming—love him or save him—but Allison might not live to make it. One way or another, the curse will have its due.”

Is there a family curse following this family from the mid-eighteen hundreds? Are the female descendants still responsible for their ancestor’s debt to the devil? Aunt Sarah turned to God as her savior to cope with her succubus blood, but her bible thumping wasn’t too far over the top to be unbelievable. She is the guardian for the twins, Allison and Jade, since their mother’s suicide three years earlier. Allison will not let being a succubus define who she is, while Jade is in the process of exploring the power without crossing the line. The sisters have the typical love/hate relationship so common between siblings. Their snide sarcastic dialogue came across as realistic as they fought as well as supported one another.

Allison McKready has met her match with Ren Fisher. He’s not falling for her Goth makeup and is out to discover the real Allison underneath the black clothes and mask she wears. It was easy to like both of their characters and their dialogue seemed genuine. Allison finds a real friend in Ren. As their relationship grows, she finds herself opening up to him. I was disappointed that a story thread fizzled out between Jade and Chris. I would have liked more resolution there. However, with the story being told through Allison’s eyes we didn’t get that.

This unique character driven plot maintains a steady pace with several twists and turns that will keep you flipping the pages. Especially when, out of the blue, the bottom drops out of Allison’s world. I did not see that coming… Probably because I was caught up in how Allison and Ren’s relationship was growing and they started exploring boundaries just like Jade had been doing all along. I can see this turning into a series as Allison sets out to learn more about the succubae. As far as she knows her family is the only one affected by this particular curse. But are there others? It seems like there has to be because this ancestor had daughters as well who would have carried the curse. And most importantly Allison needs/wants to know if a succubus is capable of romantic love?

I was given a prerelease copy so I can’t comment on this.

Thanks so much for taking the time to read and review my book!

Yay! You liked it, too. Our book tastes dovetail once again. :)

You're welcome Ms. Cook, thanks for dropping in and commenting. :D

Yes AVR, it did! It's almost like we're twins. Thanks for dropping in and commenting.