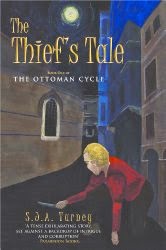 Simon Turney is a born and bred Yorkshireman with a love of the country. A love of travel and classical history have shaped the author’s writing. After several attempts at short stories Simon turned to full length Roman novels in 2003. Since then his historical fiction novels have gone from strength to strength.

Istanbul, 1481. The once great city of Constantine that now forms the heart of the Ottoman empire is a strange mix of Christian, Turk and Jew. Despite the benevolent reign of the Sultan Bayezid II, the conquest is still a recent memory, and emotions run high among the inhabitants, with danger never far beneath the surface.

Skiouros and Lykaion, the sons of a Greek country farmer, are conscripted into the ranks of the famous Janissary guards and taken to Istanbul where they will play a pivotal, if unsung, role in the history of the new regime. As Skiouros escapes into the Greek quarter and vanishes among its streets to survive on his wits alone, Lykaion remains with the slave chain to fulfill his destiny and become an Islamic convert and a guard of the Imperial palace. Brothers they remain, though standing to either side of an unimaginable divide.

On a fateful day in late autumn 1490, Skiouros picks the wrong pocket and begins to unravel a plot that reaches to the very highest peaks of Imperial power. He and his brother are about to be left with the most difficult decision faced by a conquered Greek: whether the rule of the Ottoman Sultan is worth saving.

This novel, the first in a series called the Ottoman Cycle, is from a period of history I’m unfamiliar with. I turned to it largely because of a previous work by Turney that I’d read and enjoyed, the Roman based Marius’ Mules and, although this is quite a different beast (no pun intended), I’ve no regrets in doing so.

The basis of this story is the interplay between the two brothers living in a place they’re not intended to be. Skiouros takes up the life of a petty thief, living off his wits, whereas Lykaion take his conscription seriously and becomes an earnest soldier, one that believes in the law so the pair are completely at odds.

However Skiouros’ thievery throws both of them together again. It seems Skiouros has stumbled upon some plot that threatens the melting pot that threatens the empire. A vizier is found murdered and he reports it to his brother who in turn takes it to his command structure. But Lykaion is accused of the murder and he has to run, with only Skiouros to help him.

Marius’ Mules is war based - full of battles, army life and tactics, whereas The Thief’s Tale is more intrigue and mystery related. It’s interesting to see the author willing and able to switch between these two very different styles and times in history. Overall it works well. The pace is steadier and builds with each twist and intrigue. The interplay between the brothers is key, their similar past but very different present is interesting.

All in all a very enjoyable historical fiction from a little known period.