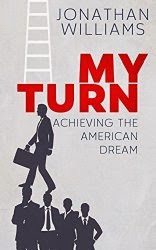 Availability
Kindle  US: YES  UK: YES  Nook: YES  Smashwords: NO Paper: YES
Click on a YES above to go to appropriate page in Amazon, Barnes & Noble, or Smashwords store

“Jonathan Williams has worked in Information Technology for over twenty years. He has spent most of his career working in the Financial and Pharmaceutical Biotech sectors. He specializes in Database Management Systems.”

“Silicon Valley is home to several large Technology and Pharmaceutical Biotech corporations. Chris moved to this area in early 2000. He has been handling data for prestigious companies for well over ten years. His work ethic and morals have kept him employed.

During his tenure at a Fortune 100 company, he is offered a position at a small Biotech. It is not too long after taking this new position that he is promoted to Management. The IT Directory who Chris reports to gives him the choice of playing the corporate game or getting fired. Chris must either choose being ethical and getting fired or keeping his job by being unethical. After much thought, he realizes that honesty and integrity have kept him from achieving the American dream. Tired of living paycheck to paycheck he decides to play the corporate game. This decision will not only affect his professional life but his personal life as well.”

Exploring an ethical conundrum such as the one setup in this book is an interesting premise. It’s an excellent way to put the reader in a situation where he or she can explore their own thoughts and feelings without suffering any real world consequences. The premise of My Turn is one with lots of possibilities.

However, the execution fell far short of the promise. There were problems with typos and bad grammar. (In fact, at the time I wrote this review even the book description used an incorrect word.) I found many of the typical problems with technique common to beginning writers. These included an overabundance of telling rather than showing (which included what is often called an “info dump” near the beginning to establish back story), head hopping from character to character without a proper transition, and a tendency to be repetitive.

One bright spot is that in places where the story involved technical areas (some might think it did this too often), there were explanations that simplified these subjects for the layperson and did so very well. Unfortunately this wasn’t enough to offset the other flaws.

Several issues with typos, grammar errors, or using the wrong word. The most prevalent was using the words stake, staking, or “estaking” instead of the equivalent form of stalking. (Estalking is the term used by the author for electronic stalking meaning to stalk someone on the internet or other computer networks.)