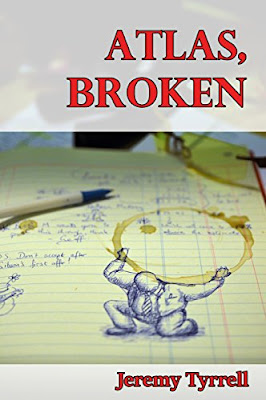 Henry Ludlow’s existence erodes as modern life takes its toll in the torture of a thousand cuts.

Jeremy Tyrrell is a software developer by day and writer in his off time. He has worked in a variety of fields; from retail hardware to burger boy, from store maintenance to tutoring, from janitor to programmer.

Atlas, Broken is told in a powerful voice that reminds at once of Ogden Nash and Franz Kafka. Walter Mitty meets the bug of The Metamorphsis. The fact that it is self-published is condemnation of the current state of letters.

The author himself called Atlas, Broken a depressing tale and some early reviews praised it for dealing with depression. I didn’t see it that way, but rather as a story of Every Man, even the giants among us. Sam Houston, the hero of the Texas revolution and a Unionist who was unable to prevent the state from joining the Confederacy, considered his life a failure. George Eastman, founder of Eastman Kodak, famously wrote “My work is done, why wait?” before he killed himself.

Tyrrell uses humor expertly, not to take the edge off his stark look at the human condition, but to hone the edge to razor sharpness. Highly recommended.