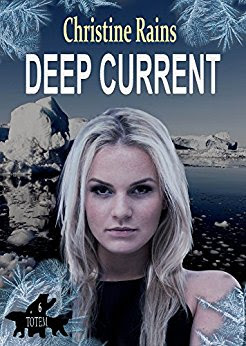 “Lost to the clutches of her grief of losing her mentor, Saskia Dorn welcomes the opportunity to take down a warehouse of drug dealers. When their leader makes a break for it, Saskia and her ex-boyfriend, Sedge, chase the criminal shifter into the sea off the coast of northwestern Alaska. Not only do they lose their quarry, but a vicious sea hag snatches Sedge.

“Christine Rains is a writer, blogger, and geek mom. She's married to her best friend and fellow geek living in south-central Indiana. They have one son who is too smart for his parents' own good and loves to pretend he's Batman. Christine has four degrees which help nothing with motherhood, but make her a great Jeopardy player. When she's not reading or writing, she's going on adventures with her son or watching cheesy movies on Syfy Channel.

This novella starts with a raid on a drug lord’s warehouse on the northwestern coast of Alaska. Saskia is a fierce warrior and relishes the fight, taking out her anger on the humans working in the warehouse. When the shifter kingpin shows up Sedge and Saskia give chase across the ocean. Meanwhile, a vicious sea hag with men issues hears Saskia’s thoughts of aggravation with Sedge and snatches him away. Now Saskia is in a race against time to free Sedge from her clutches.

I enjoyed the way Ms. Rains wove the Inuit mythology of the Salmon People into this tale. True to the myths of other Native American stories the themes are circular and the seeker has to find the way according to their own situation. Deep Current is Saskia’s story of facing her own truths. She has to take a long hard look at herself and her own fears about what’s holding her back from Sedge. He’s made it clear he’s not going anywhere, and Saskia has to trust him enough to be honest with him and herself. But first she has to save Sedge from the sea hag who has stolen his bear aspect and he can’t survive without his bear magic in the harsh elements under the icy sea in his human form.

Deep Current is full of action, heart, and soul. It is nice to finally understand what Saskia has dealt with in her past that closed her off. It’s going to be interesting to see if she loses any of her fiery personality. Though I don’t expect this new perspective to affect Saskia’s hardcore fighting spirit to protect the shifter world. However, I do hope to see glimpses of her softer, more accepting side more often now.

If you haven’t started reading the Totem series of novellas, I highly recommend them. Each novella comes to a satisfactory ending, however, the mission to reunite the totem tokens is still incomplete. And as far as I know Totem #7, #8, and #9 release dates are yet to be determined.

Contains adult language with several F-bombs. Deep Current is the sixth book in the Totem series. This series of novellas build on each other and should be read in order. Totem #7, #8, and #9 release dates are yet to be determined.