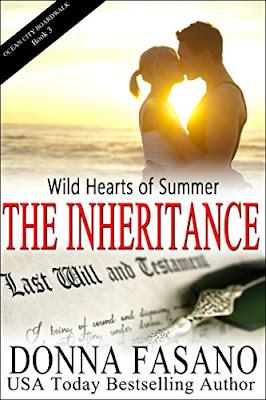 “Cathy Whitley’s two best friends, Sara and Heather, may have found the men of their dreams… and that’s all well and good for them. But that’s not going to happen to Cathy. She allowed love to catch her off-guard once and it drained her, body and soul. She’ll never let it happen again.

Brad Henderson has been chasing Cathy for years. He’s settled for their on-again-off-again, ‘friends with bennies’ relationship for far longer than he expected. Attempting to navigate the rip currents surrounding her heart has left him swimming in circles.

Then Brad inherits a business from billionaire Harold Hopewell. Hopewell had traveled the world and was touched by the stories of the people he met. In death, Hopewell is giving back, leaving an unusual will filled with life-altering bequests. Brad is stunned and wonders if his new life will draw Cathy closer—or push her further out of reach.

One way or the other, it’s time to draw a line in the sand…”

You can learn more about Ms. Fasano on her website or stalk her onFacebook.

I have enjoyed this Ocean City Boardwalk Series from the beginning. Wild Hearts of Summer is Cathy’s story and it was well worth waiting for. Cathy is a feisty, strong-willed thirty-five year-old who was raised by a dysfunctional family. Her hard life continued with a bad marriage after she graduated. When she finally escaped, she moved back to Ocean City to reunite with her friends, Sara and Heather. Cathy is still working on her recovery, trying to define who she is. She is the wildest and most free-spirited of the group and refuses to be tamed. She also has an on-again-off-again relationship with Brad Henderson, who is the head lifeguard at the beach.

Brad has been patient with Cathy for the last five years since her divorce, letting her take her time to move on. However, as certain events come to pass he decides he wants more of a commitment in their relationship. Their journey is heart-warming and tense as Cathy has to come to terms with her past and heart. It’s especially hard on her because she’s on the outs with Heather, and Sara has enough stress of her own to deal with at this time. So, she’s more or less on her own to work through the feelings warring in her soul.

Ms. Fasano has a way of weaving wonderful heart-warming stories that never disappoint. Her characters are always well-developed, their dialogue is engaging, and realistic. The setting at Ocean Beach is so breathtakingly described you can feel the ocean breeze, smell the salty air, and almost hear the waves hitting the beach.

I do hope there will be more stories with these characters. They’ve become like friends of my own, and I want to keep track of them. I would love to eat breakfast at the Sunshine Café, spend the night at the Lonely Loon, and enjoy the confections from Sara’s Sweet Shop.

Wild Hearts of Summer is Book three in the Ocean City Boardwalk Series. While this third book could be read as a stand-alone, the reader will have a deeper understanding of all the characters having read this series in order. Ms. Fasano also includes recipes at the end of this story, as she has in the other books of this series.

I found no proofing issues.

Thank you for reviewing WILD HEARTS OF SUMMER!

You are welcome, Ms. Fasano. Before reading Cathy's story, I wasn't sure I would like her at all. So, thank you for proving me wrong. :)