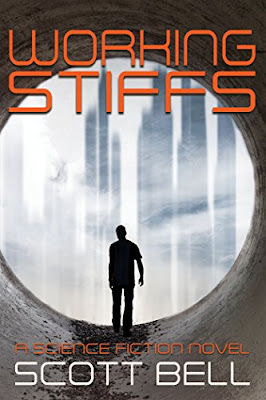 “In a time when civil liberties have been eroded and unemployment has exceeded Great Depression levels, nanotechnology provides the ability to reanimate the recently dead. Far from zombies, but nothing like their former selves, ‘Revivants’ are a ready source of cheap labor able to perform simple, routine tasks. Great news for some sectors, but for many, the economic and social impact is devastating.

Enter Joe Warren—an unemployed college dropout, who is self-absorbed and disinterested in the world’s problems. All Joe wants is a job, food on his table, and a cure for his girlfriend’s lingering illness. What Joe gets is a stint in jail with a bunch of self-proclaimed freedom fighters, and coerced to become an informant by federal government agents.

Joe is forced to examine his me-first attitude, and in the process learns that some things just might be worth fighting—or dying—for.”

“Scott Bell holds a degree in Criminal Justice from North Texas State University, and has enjoyed careers in both asset protection as well as sales. With the kids grown and time on his hands, Scott turned back to his first love—writing. His short stories have been published in The Western Online, Cast of Wonders, and in the anthology, Desolation. Yeager's Law is his first published novel, but there are two more due for release next year, and more on the way.

When he’s not writing, Scott is on the eternal quest to answer the question: What would John Wayne do?”

This is a story of two distinct parts. It opens as a cyberpunk-styled romp through a future world where human society is being disrupted not by robots, but by Revivants (nanotech driven zombies). Told in first person by Joe Warren, who is possibly the most smart-mouthed and sarcastic character I’ve ever come across, I found myself flipping through pages of fresh writing and laughing at Joe’s wisecracks. Try these: “I snagged Jamil by his fancy dress jacket--the material caressed my fingers like it wanted to blow me.” or, in reference to his ill treatment during interrogation by the cops, “they beat you like cake batter,” and, “Ramirez studied me the way a surgeon examines colon polyps.” One more: “‘Ah!’ Rogair made a noise like he’d discovered masturbation.”

There were a bunch more, but hopefully you get the idea. Every page is littered with grin-worthy smug irreverence.

The dystopian world is fairly stereotypical (big business and government=bad, poor working stiffs=good), but it was revealed nicely through the action with only a smattering of dogma or political pretentiousness from the author. The last quarter of the story focused on the final conflict between the bad guys and the Resistance. Here, the writing morphed into action/adventure with little or no reference to future-tech. This did make the novel a little schizophrenic for this reader. I preferred the cyber-punk stage, and the change of focus late in the story did shoehorn in a number of new characters which diluted the tension somewhat.

But overall, this was a terrific read, unusual, tongue-in-cheek funny and hyper-paced. If you enjoy characters like Joe Warren and/or action sequences teeming with bullets, I think you’ll have a lot of fun spending a few hours in Scott Bell’s dystopia.

Although all of them seemed necessary to me, there are many, many F-bombs.

Very clean copy. I found only one typo!