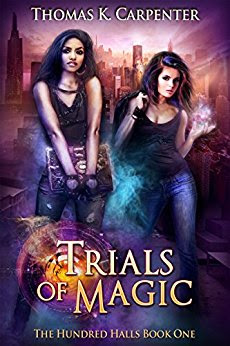 “Aurelia ’Aurie‘ Silverthorne is one of the best and brightest to ever apply to the Hundred Halls, the only magical university in the world. To be accepted, she must pass grueling trials that claim the lives of aspirants every year.

But more than her desire to practice magic is at stake.

Aurie's little sister has been courting powerful forces in hopes of protecting herself from the beings that killed their parents, but alliances come with complications. As things spiral out of control, and dangerous foes arise at every turn, Aurie knows the only way to protect her sister is to pass the trials—even if it means making a terrible sacrifice.”

“Thomas K. Carpenter writes in diverse genres including: YA dystopia, post-cyberpunk sci-fi, steampunk, historical fantasy, and alternate history. His Top 50 Bestselling series the Alexandrian Saga can be found on Amazon. He lives in St. Louis with his wife, two kids, and one oafishly large Labrador retriever.”

Aurelia and Pythia Silverthorne are magical sisters who lost their parents when they were young and were raised in foster homes until they were old enough to live on their own. Aurie is the oldest and almost twenty now. This is her last year to take her Merlin’s test, which will determine whether she will be accepted into one of the Hundred Halls for further magical education. She has always felt like her parents deaths were somehow her fault, and therefore, it is her job to protect her younger sister. Pi, who is two years younger than her sister, is old enough to take her Merlin’s as well. Pi has chosen the house of Coterie, an elite house in which she needs to find a sponsor. The one she approaches is a master wizard who gives her an impossible task to complete, which with the unwitting help of Aurie, she manages to complete. This is just the beginning of their problems.

Aurie is the book smart sister who has put off taking her Merlin’s to care for her younger sister when she was ill. Pi is the street smart sister more willing to take risks, both have their strengths in different areas and they work well together. Their love and devotion to each other pulls them through many tough spots.

The plot is multilayered and moves fast as the girls are set with unique challenges during their Merlin’s. And then trying to fit into the houses they are assigned to. There are many rivalries between the students, but they manage to find a couple friends they can rely on. Each sister has her own story arc and their paths cross occasionally. However, when Pi comes across a deeper darker conspiracy in the Hundred Halls the girls start working together, putting both of their lives in danger. Aurie learns the hard way that book learning will only get you so far in life. She must look within to find her real strength.

I think this will be an interesting series to follow. The challenges, characters, and settings are well defined. The dialogue is entertaining and draws the reader in. I also found Mr. Carpenter’s use of magic unique.

There are several F-bombs dropped.