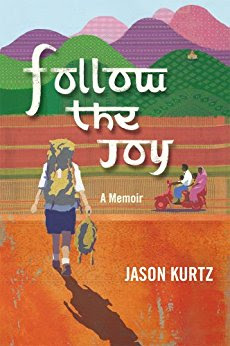 At age 27, the author bought a one-way ticket to India determined to let intuition be his guide. If that sounds like the introduction to a travelogue, you’d be right. But this book is indeed memoir, because the story is less about Jason’s travels than it is about a spiritual journey he undertakes as he strives to find meaning in his life.

Jason Kurtz is a psychoanalyst in private practice as well as the Director of Training for the Training Institute for Mental Health. Follow the Joy is his first book.

I don’t read many memoirs. Perhaps I should, because I certainly enjoyed this one.

I selected the story because I’ve always found Eastern religions—in this instance, Buddhism and Hinduism—fascinating. They seem to embody the concept of selfless love and a search for oneness with the infinite but without the social, structural (and financial) trappings I associate with Christian religions.

Jason’s trip started in a most inauspicious manner, and rapidly went downhill from there. From the minute he landed, he was harassed by beggars and hustled each time he attempted a financial transaction with the locals. His failure to plan for or even anticipate what he was undertaking exposed him to a raw edge of Indian society far removed from glossy tourist posters featuring the Taj Mahal, or idealized Bollywood movie scenes.

Throughout, I admired his ability to look again, to challenge his initial impression of each place, or each person he met. This patience often enabled him to penetrate the superficial layers and gain a better understanding of why a person behaved as they did, or why a cultural structure existed.

Jason started his journey in the hopeful belief that in India he would find a purpose in his life. He was driven by a need to address certain character weaknesses that he believed were holding him back from achieving happiness.

Yes and no. Of course, everyone has their own route to happiness, but through Jason’s experiences, I came away with a better understanding of what is really involved in a search for inner-peace. His route would not be mine, but I’m glad he shared his journey with me.

Added for Reprise Review: Follow The Joy was a nominee in the Non-Fiction category for B&P 2015 Readers' Choice Awards. Original review ran August 10, 2014