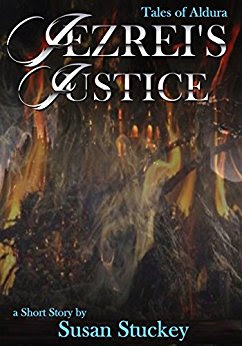 “Elderly and frail, Jezrei is tasked with the safety of more than twenty children when the City of Azraelis is attacked by an enemy bent on slaughter and subjugation. How can one old man hope to stand against an entire army?”

This short story is a glowing testament for love and faith on many levels. Jezrei is an elderly Lieheiren Muhadun, a teaching priest with healing powers, of the Kalieri. He is tasked with the protection of a group of children in the Temple while the barbarian Halurdow storm the town killing and burning everything along their way.

As the battle moves closer, Jezrei recites the history of the twin god, Azrael, who created the population and creatures of Aldura, the land on which the Kalieri live. Jezrei is able to see the hopelessness of their situation locked in the Temple. However, he is able to keep the children calm and with that peacefulness the children remind Jezrei the words spoken by Azrael as they come face to face with the Halurdow.

Ms. Stuckey has developed an intriguing and detailed history for her series. I find it a joy to be drawn into her stories. Even as heart-rending as Jezrei’s Justice could have been.

Jezrei’s Justice can be read as a standalone. However if you would like to see the published Tales of Aldura arranged in time-line order. Click here.

I noticed no issues.