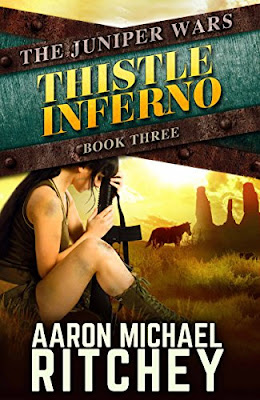 “By 2058, both the Sino-American War and the Sterility Epidemic have decimated the male population. Electricity does not function in five western states. Collectively, they are known as the Juniper. It is the most dangerous place on Earth.

Cavatica Weller and her gunslinging sisters did the impossible: they took three thousand head of cattle across a wasteland of outlaws, blizzards, and a cloned army of super soldiers. But once again, they are on the run.

This time, there are no outsiders, they know who the enemy is, and the stakes have never been higher. In the deserts of a broken world, they’ll be pushed to their limits.

And standing between them and freedom is a mysterious city ruled by men.”

If you have been reading this series and enjoying the wild ride, hold on to your hats and boots ‘cause you ain’t seen nothin’ yet… The Weller sisters are pushed to the edge of insanity in Thistle Inferno. The steampunk element is pushed even further thanks to a new found ally. Also, an old friend of Wren’s joins the small group, at least for a while. We will have to watch for future development in this relationship.

There are more twists and turns in this virtual roller coaster than I have ever experienced before. There are a few slow parts, however, Mr. Ritchey is only giving you a chance to catch your breath before the ride starts again. Strength and fortitudes are tested again and again. Emotions are manic with a small degree of resolution reached. I’m not sure if I can keep up with all this tension, it’s wearing me down.

The New Morality code beliefs that Cavatica values so highly have always struck me wrong. They are way too strict for women where society has more women than men. It puzzles me that most women remain submissive. Cavatica has outgrown the submissive behavior because of their circumstances. Even though she is the youngest of the Weller sisters she has been leading the mission to deliver the sterility cure to the rest of the world. God is playing a larger role in Cavatica’s life, she’s grasping for strength outside of herself.

While I thought the New Morality was one of the worst codes to live by, I was mistaken. When our small group of crusader’s are taken captive by a group of hunters, they are led to a heavily guarded mysterious city ruled by men. Holy crappola! Women are viewed as property to be fought over. The more women a man owns the more status he has in their society. Entertainment in town are the bloody fights staged by men wanting a larger harem to call their own. Then, as I am giving up all hope for the Weller sisters and Micaiah’s survival, Mr. Ritchey leaves us with a small spark of hope for their future.

Thistle Inferno is book three in THE JUNIPER WARS series. I believe it is best to read books one and two before starting Thistle Inferno.

I was given an unproofed ARC, so I can’t really comment on the finished product.