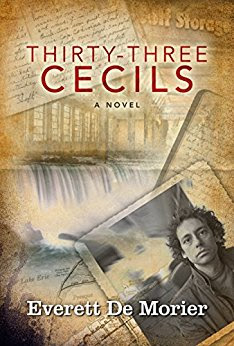 The novel purports to be the found journals of two men; Walker Roe (a once prominent cartoonist who went to jail for swindling and counterfeiting) and Riley Dutcher (a functioning alcoholic who worked in a landfill site office). What happens when their paths cross, and they start recording their experiences, is what the story is about. It’s just a story about a couple of ordinary Joes, really. But what a story!

Everett De Morier is a jobbing author, writing anything from articles about fishing to books about marriage. He is editor in chief of 543skills.com. He is also a playwright who has created seven original theatrical scripts, all produced by Cornerstone Drama of Dover, Delaware. This is his first novel. You can read more about him and the book on his Amazon author page.

This is an extraordinary book. It defies description. In a good way. It begins by telling you the end (and it doesn’t matter): it continues by telling you the same story from two different viewpoints (and it doesn’t matter): and within each of those viewpoints material is often revisited several times (and it doesn’t matter). Despite this the account is both complex and fantastical. The story is fake news. Or is it? Its two protagonists are, neither of them, proud of their lives to date. And it is far from clear that their final project is anything to be proud of either. Their escapades, severally and together, are bizarre. The events that occur are impossible (and – guess what? – it doesn’t matter). There is a sort of cosmic inevitability about the plot development. Coincidences abound. Indeed, serendipity is ‘the scary thing’ that drives the book. That and the deep desire of Roe and Dutcher to become different men, to make amends to themselves, each other, their families and everyone else who was touched adversely by their lives.

I couldn’t put it down. And I know very well it will repay rereading.

I have no idea what genre this belongs in. But if you like a slow burn of a novel (and I do mean burn), then definitely put this on your ‘to read’ list.

It’s a tad overwritten. De Morier does like to make the same point (usually) three times – and (being a fine, inventive writer) likes to make it in a different way each time. This does not lend itself to the wham-bam-thank-you-Ma’am style of novel which is currently fashionable. I occasionally felt I was disappearing over the hills and far away when following one of De Morier’s shaggy dog stories (do you call them that in the States?). But I found resistance to be futile – this book is completely beguiling if you just go with the flow.