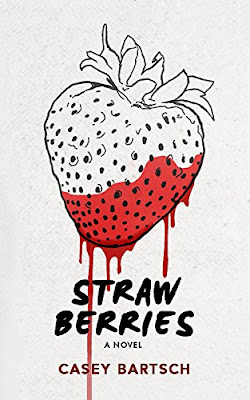 A serial killer leaves a Strawberry symbol at each of his murders.

Casey Bartsch is an author based in small-town Texas.

The story is populated by a cast of quirky characters who have apparently separate story lines. Part of the puzzle is how they all fit together. Ultimately the tie-ins are clever with the best of the lot coming at the epilog. It all builds to a satisfying and surprising ending.

The problem is that the psychopathic killer lacks believability. He is put away in a secure facility as a boy for slaying neighborhood pets. His primary doctor believes he is ready for release in his twenties, but that doctor leaves the facility. A second doctor says he doubts the killer is ready to go free, and his parents have been paying the state to keep him locked away. It isn’t clear how or why he gets out.

The killer on the loose is portrayed as dysfunctional, yet somehow he manages to survive with no apparent means of support. The only way the reader is told he gets around is by walking. All we know about him is that he shows up at improbable instances and murders people “to ease his pain.”

Inexplicably, the killer becomes a folk hero, which is an odd distraction from the story line. Outside of horror or fantasy tales, a villain needs real-world credibility to invoke chills or fright. The Strawberries murderer doesn’t have it.

Victims include a toddler killed in a particularly vicious, as well as physically impossible, method. It was a needlessly vile scene and reason on its own to avoid this novel.