Reprise Review: The Curious Case of the Missing Moolah by Martin Stanley 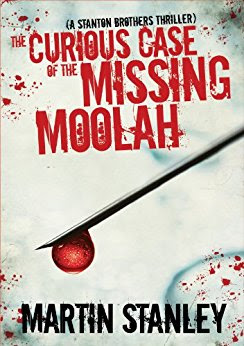 The Stanton brothers have been robbed of £10k (the missing moolah), if they don't retrieve it is them who will owe their loan shark boss. The trouble is they don't have that kind of cash squirreled away. So the boys have to correct their little problem before anyone becomes aware of it.

Cue the Stantons causing havoc across the seamier parts of Teeside and their seedier residents.

Martin Stanley studied to be a graphic designer. A love of crime fiction at an early age led Martin to start writing. He has previously released two novels and a short story collection.

I am a fan of Martin Stanley's books and, in particular, the Stanton brothers. The author is one of those self-published authors working tirelessly to expand and build on his portfolio and grow his reader base. Why he hasn't got a deal with an indie publisher yet, I don't know.

Anyway, to the novella. It's written in the first person, from the perspective of the more intelligent of the Stanton brothers, he's the brain, the other (literally) the brawn. One interesting point to note is neither character is named throughout (although the author has revealed their given names, previously) a little aspect I like and is well handled, strengthening the story rather than weakening it.

As with all of Stanley's books the narrative is fast paced, the brothers spill from one chaotic scene to another in their break-neck pursuit of the missing cash. Along the way they discover several cases of double dealing and back stabbing. It's violent and gritty, as you would expect from the author.

The characters are excellent. I particularly appreciate the more thuggish of the two brothers. He is short tempered and believes the solution to every problem resides in his fists. Even though the brothers are vicious criminals I can't help but like them, the smarter brother is no angel, but there's a nicely balanced ying and yang between the pair. The dialogue is sharp and fun. By no means is this a grim tale, the author stitches the action with a ribbon of black humour.

All in all another excellent, fast read. I'd like to see the author return to a full length Stanton novel, to give the brothers more room to play (but note I am guilty of bias here, it's purely a case of character greed).

Added for Reprise Review: The Curious Case of the Missing Moolah by Martin Stanley was a nominee in the Crime Fiction category for B&P 2015 Readers' Choice Awards. Original review ran March 1, 2014