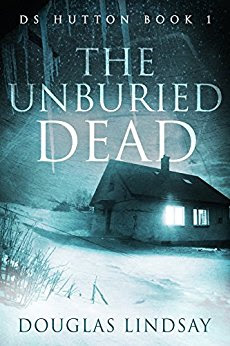 A woman's body is found, she's been brutally murdered, stabbed over a hundred times. DCI Bloonsbury, once a superstar detective but now a washed up alcoholic, takes charge of the case. As more bodies appear Bloonsbury's faded abilities become a liability and DS Thomas Hutton is in the thick of it, he has theories of his own. But there's a problem, it seems the killer is closer to home than anyone wants to believe and there's a whiff of corruption...

Douglas Lindsay was born in Scotland, but now resides in the south of England with his family having lived in Belgium and Senegal in between. Douglas has written several novels with protagonist Barney Thomson taking centre stage. The Unburied Dead marks the debut of DS Hutton.

I thoroughly enjoyed The Unburied Dead, Lindsay doesn't mess around with the story, he just gets right into it from the outset and then drives at a heady pace where events whip past the reader. The narrative is clipped, often using the bare minimum of words.

At the outset the reader meets Hutton, a man whose difficult past overlaps and complicates his present. He's a copper, not the brightest, but tenacious and ultimately wants to get to the truth, regardless of cost. His personal life is all over the place, several divorces behind him, along with a multitude of one night stands and affairs. Hutton joined up because of Bloonsbury, but the guy is a disappointment these days, and spends most of his time drunk.

The Unburied Dead is mainly written in first person (Hutton), present tense which helps keep up the pace. Periodically the author also drops in short chapters in third person where we're in the mind of the deranged killer. Again it works well and adds an extra layer. The story is set up to and over Christmas, but the season of goodwill doesn't extend to the investigating team and the victims, it's a nice offset.

The characters are excellent, the vast majority of which are police. Almost to a person they have their problems, quirks and behaviours. Besides Hutton and Bloonsbury there's DI Taylor, a good detective but another with a messy life - the job has destroyed his marriage. Then Superintendent Miller, an attractive woman who seems to sleep with everyone (including Hutton, whilst his wife is trying to rekindle their relationship) and Crow, an ex-copper who now lives in his own detritus, among others.

One aspect I really enjoyed was the way the author utilised the characters. Although there is brevity in the tale Lindsay shows interactions between the players, how and why they live their lives with wry observations of life thrown in. One example is a night out where everyone gets drunk, a constable in particular who dances in an increasing state of undress and then isn't allowed to forget it.

An excellent, well written story that will appeal to readers of gritty, down to
earth crime / noir.