Review: Through the Keyhole to One L of a Mess by J.M. Fagan 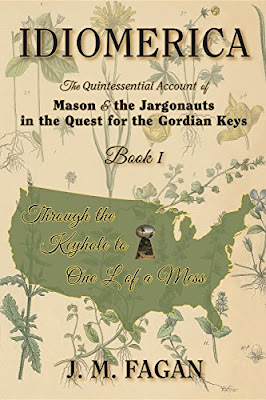 “A vague, shadowy trouble lurks beneath the customary tenor of Idiomerica, its citizens unaware of the peril they will soon face. A complex knot of abomination is beginning to cinch down to a stranglehold. Who with but a snowball’s chance in hell would have the audacity to think of challenging the layers of an all-but-invisible yet powerful entity? Maybe it isn’t always best to know what you’re up against. If you knew, you might reconsider.

Bogged down while attempting to navigate the overwhelming imbroglio of the oxymoronic nature of his life’s circumstances, and just when things couldn’t seem worse, a high school teacher and troubled soul improbably named Cliff Hangar finds himself thrust into a terrifying paradox that eclipses his former troubles by an exponential magnitude, in the realm where ruination and Murphy’s Law collide.”

Are you familiar with the saying that describes something as “too much of a good thing”? The author of this book makes the point that idioms like this are often the “simplest and most precise” way of communicating a particular thought. He’s right, kinda sorta. But those teachers who suggest you limit their usage in your writing because they’re cliché might also be onto something (as clichéd as that suggestion might be). In fact, one online dictionary had this as a key part of the definition of cliché.

“A sentence or phrase, usually expressing a popular or common thought or idea, that has lost originality, ingenuity, and impact by long overuse”

Wording that differently, these once original and ingenious thoughts have been used so much that they’re now worn out. When I started reading this book the idea of stringing together cliché, after overused idiom, after time-worn phrase was amusing. I’d read a line like this and it tickled my funny bone, just a bit:

“How could such a kind and generous pillar of the community, a wonderful friend and confidant, be taken out in the prime of her life?”

But eventually I felt more like this line from the book:

“Giving up was not an option, even though I knew I had bitten off more than I could chew. I was in over my head. My worst nightmare and Murphy’s Law collided.”

That’s five clichés strung together. I wasn’t going to give up, but I really wanted to. What was amusing a small amount in the beginning of the book was just a grating screech in my poor tired brain by the end of the book.

There was a story buried in that endless string of clichés. The funny thing about stories is there are a limited number of stories to tell. Articles and papers have been written claiming that there are only X number of basic stories out there. The entire romance genre (girl meets boy, stuff happens, girl and boy live happily ever after) is just one of those basic stories. The thing that makes those basic stories different or unique is in how they’re told. The story told in “Through the Keyhole …” felt kind of (do I really even need to say it?) … clichéd.

This is the first book of a series; however, it stands alone fine. I didn’t feel as though it left any loose threads or cliffhangers.