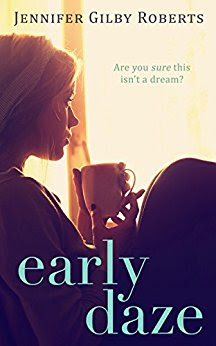 Jess falls pregnant. Although the father is her fiancé, it’s not as planned event. Then to top it all off, her baby arrives three months early. The novel focuses on her time spent attached to the Neonatal Intensive Care unit at her local hospital where her baby was being cared for.

She has a degree in physics and a postgraduate certificate in computing, so a career writing fiction was inevitable really. She was born and grew up in Surrey/Greater London, but now lives in Richmond, North Yorkshire with her husband, small daughter, two middle-aged cats and a lot of dust bunnies.

Her main job is taking care of her daughter, who was born three months premature but is now a healthy toddler.”

What I like about women’s fiction, in general, is that the stories often tackle complicated and deeply emotional subjects. I found this to be the case with Early Daze. Only after I’d finished the novel (in two sittings—fast for me) did I realize that the author had first-hand experience of giving birth prematurely. For sure, her intimate knowledge of the workings of an NICU added to a tale that grabbed onto me from the first page.

Early Daze is not a memoir but a work of fiction, and better for it because it gives the author a broader canvass and allows her license to explore some of the “what if” moments that I’m sure she pondered when she was actually going through the trauma.

Ms. Roberts is one heck of a writer--crisp, clear sentences, deeply expressed raw emotion, believable dialogue; all lightened by a smattering of the strange humor that always accompanies human tragedy.

Jess and the other women with babies on the NICU form a loose support group, all struggling to come to terms with the possibility that their babies might not survive. These characters were multi-faceted. They handled the stress in different ways that seemed very real to me.

Pivoting around the fulcrum of her preterm daughter, Jess, her mother, her sister, and her fiancé shift and change and develop as they face up to the sudden chaos of being tossed a premature curve ball that no one was prepared for.

No errors. English spelling and English settings, but nothing that would cause confusion.