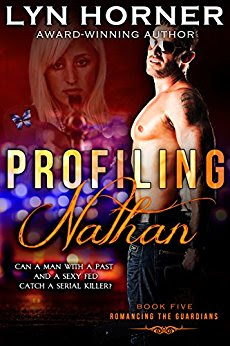 “Nathan Maguire is a Guardian of Danu, and he possesses a deadly psychic gift. He also has a checkered past. As a young man, he spent time in prison, where he learned the rudiments of tattooing, a skill he has built into a successful business in Tampa, Florida. He’s content with his life – until a beautiful FBI profiler walks into his shop.

Talia Werner has come to deliver an urgent message from one of the other Guardians. The trouble is no one outside that select group is supposed to know they exist. Nate doesn’t believe Talia and suspects she is up to no-good. Meanwhile, she finds out a woman was brutally murdered not far from Nate’s shop. This is the third such killing in the past two months. A serial killer is loose in Tampa.

Working with the police, Talia discovers all three of the victims bore a blue butterfly tattoo, one of Nate’s designs. Suspicion falls on him but quickly points to other tattoo artists. Enlisting his aid in meeting and interviewing them, Talia develops a growing attraction to the man, who isn’t at all what he seems to be on the surface. Nate returns her feelings and their relationship heats up.
However, the killer is still on the hunt, and he knows Talia is after him. Will the stubborn woman accept Nate’s protection or will she be the murderer’s next victim?”

Nathan Maguire has a good reason to be suspicious of the woman who walks into his tattoo parlor with a message asking him to make a phone call to a man he doesn’t know. He’s a member of an elite secret group of protectors for the Goddess Danu. He isn’t aware that Talia lied to her boss, at the FBI bureau, to deliver an urgent message to Mr. Maguire, in Tampa, Florida, from her former FBI partner, Dev Medina. Needless to say the mistrust is mutual.

When Talia hears about a possible serial killer in the Tampa area she offers her service to the local police since she is a profiler for the FBI. She plans on using the extra time in the Tampa area to convince Nathan to make the urgent call to Dev. Things heat up, in more ways than one, as Nathan helps her investigation and they get to know each other better. It turns out the woman who doesn’t think she needs protection really does need Nathan to protect her.

The plot twists are an emotional roller-coaster ride as I became invested in both character’s journey. One twist in particular is downright funny. Another is horrifying. The dialogue is realistic and engaging. Profiling Nathan is another great addition to Ms. Horner’s Romancing the Guardians series, weaving together mystery with a touch of paranormal, adventure, and romance. I am looking forward to locating the next guardian of Danu.

Profiling Nathan is book five in Lyn Honer’s Romancing the Guardians series. I would recommend reading this series in order starting with Rescuing Lara. This book does contain sexual situations that may offend some.