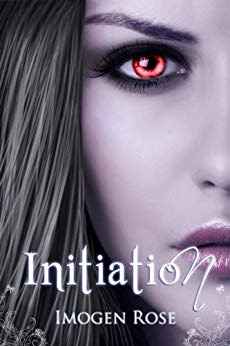 The first book in Rose’s Bonfire Academy series. This new series ties into the Bonfire Chronicles series, of which Rose has one book thus far, Faustine.

Initiation could be considered a prequel to Faustine as that book takes place after Faustine’s graduation from the Bonfire Academy. This book introduces us to several students, including Faustine, at that exclusive private school for paranormals near St Moritz, in the foothills of the Alps, and takes us through their first year.

Initiation has been picked as a Red Adept Select book. These are books that “stand out from the crowd” among those edited by the team at Red Adept Publishing.

Globetrotter Imogen Rose is Swedish by birth, went to college in London where she received a PhD in immunology, and is now a Jersey girl. After her eight-year-old daughter insisted she write down her stories, Rose wrote the first of her Portal Chronicles series and decided to let it out into the world. The response was so positive that she’s continued with three books in the series. At least one more planned, and started two other series. For more, visit Rose’s website.

Think about the average high school, full of hormonal teens pushing all the limits set by those in authority (I had to dig deep into my repressed memory to remember. If I can do it, so can you.). Now give those teens paranormal powers that they are still learning to control (not unlike those hormones in humans). In fact, learning about their just emerging powers — how to control them, and how to put them to the proper use — is the reason the Bonfire Academy exists. With werewolves, vampires, shape shifters, and wanderers, along with various hybrids, life at Bonfire Academy is even more complicated than a regular high school.

Although Initiation focuses on Faustine, who Rose fans will know from the book of the same name, and Cordelia, an older student assigned as Faustine’s mentor, the book has enough other characters who play major roles that it could easily be viewed as an ensemble cast. It appears the Bonfire Academy series will be a prequel to the Bonfire Chronicles series. Those who haven’t read Faustine should have no problem understanding, while those who have will meet a younger, less mature version of Faustine along with an earlier glimpse of a few characters they’ll remember from Faustine.

With Initiation, Rose introduces a series that should be a hit for fans of YA Paranormal (a demographic that seems to include as many adults as teens). She has laid the groundwork for at least two more books in the Bonfire Academy series and the possibility of many more in the Bonfire Chronicles series.

A small amount of adult language and a small amount of relatively mild sexual content (implied, rather than explicit). Nothing a typical high school student won’t hear in an average school day.