Review: The Death and Life of Dominick Davidner by Shawn Inmon 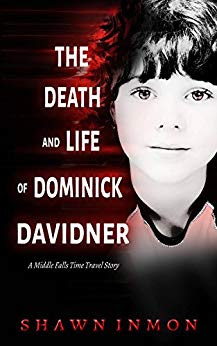 “How many lives would you spend to find your beloved?

Dominick Davidner was murdered. Then things got worse.

Instead of going on to the afterlife, Dominick found himself back in his nine year old body, all memories of his previous life intact. All he can think about is Emily, the love of his life, left behind when he died.

Unfortunately, she is now thousands of miles away. How can Dominick find his way back to the woman he loves, and what will he say if he finds her?”

Former DJ, business consultant, and real estate agent, Shawn Inmon is now a fulltime author. A regular contributor at Indies Unlimited, Inmon can't seem to decide whether to write fiction (Rock'n Roll Heaven), or non-fiction (he’s written two travels books, partially chronicled at his A Lap Around America website). Then there are his first two books that were novels based on truth or fictionalized memoirs or … I don't know what to call them, but they were somewhere in the middle.

This is the third book in Inmon’s Middle Falls Time Travel series. Each book can be read as a standalone novel because while each of the protagonists spends some time living in the fictional town of Middle Falls, Oregon, knowing what happened in a prior story isn’t needed to follow newer books in the series. The main thing each book has in common is the protagonist dies. Upon his death the character is shocked to discover that they’ve gone back in time, to some point in their childhood. They have the body of a child, but retain memories of the life they led before, which gives some clue as to what might be coming, both for them personally and for the world in general.

The first two stories in the series focused on second chances with the main characters trying to live their lives better the second time around. In one case this was by avoiding a big mistake. In the other it was mainly by trying to prevent someone else from making a major mistake that effected many others.

This installment of the series is different in that Dominick, the protagonist, has only one goal when he starts his life over, to meet and marry his spouse once again. Easy, isn’t it? Just do everything the same as you did the first time around and it should work out fine. But it seems foolish to take the same boring route through life, especially when there is an obvious shortcut to get where you want quicker, right?

The premise of this series makes for some entertaining and thought-provoking stories. As they illustrate, maybe if we had life to live over again, knowing what we know after having learned a thing or two from the school of hard knocks, it may not actually be as easy as we think to get a better result. Just like my rewriting that sentence didn’t result in one that ran on less, sometimes things don’t turn out better, just different.

This is the third book in Inmon’s Middle Falls Time Travel series. It can be read as a standalone novel.