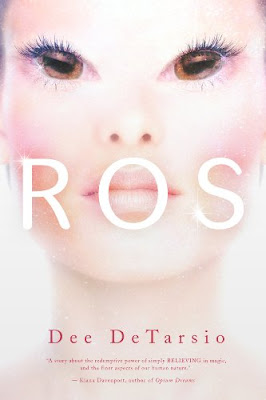 When a small spacecraft crashes behind her house, the previously bored-with-life Micki Cramer finds a purpose, helping Ros, the alien who was piloting the craft, avoid authorities until Ros’ rescuer arrives. At least they hope a rescuer is on the way.

A native of Ohio, after college Dee DeTarsio fled for warmer climes, first as a TV news producer in Tucson, Arizona. She now lives in San Diego with her husband and two children, where she has worked as a producer/writer at SeaWorld and on an NBC comedy/variety show.

To learn more please visit Ms. DeTarsio on her website or her Facebookpage.

Dee DeTarsio may write Chick Lit, but her books are never just that. They always include elements you’d expect in other genres and almost never see in Chick Lit, like action-adventure (which features in both of her books I’ve read) or even a science fiction element, as in the alien this book is named after. These additions are fun and entertaining. They allow DeTarsio to take the story in directions you wouldn’t typically see in Chick Lit.

Pushing the genre boundaries is fun, but what stood out for me in this book was the sense of humor of the main character, Micki. At least in the beginning, she seems to be lacking in self-esteem and is unhappy with life. She lets people run over her which results in her ex-mother-in-law (who is in a mutual-loathing society with Micki) being dumped on her. But Micki’s inner dialogue is always funny and witty, as in this snippet involving Rhoda, her ex-mother-in-law:

“No go,” Rhoda said. “I think there was a murder in that bathroom. Something died in there. I could not use it. I would not go.” And now she’s Dr. Seuss? Could you, would you, in your pants? I wanted to scream.

I found Micki’s “voice” to be unique from that of Julie Fraser (the protagonist in The Scent of Jade, the other book of DeTarsio’s I’ve read), which is something most authors have a hard time doing this well for characters who are so different. If you’re a fan of Chick Lit and not afraid of the boundaries getting stretched a little, the story of Ros would be a perfect choice.

Thank you SO MUCH Big Al! Ros is one of my favs--and it just made my day that you brought back her review! Thank you!!

You're welcome, Dee. We like to give some of the best books we've read a little extra attention. :)