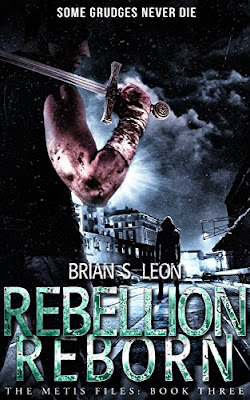 “Millennia ago, beings we call angels were tasked with watching over humankind in its infancy. Rather than protect humans, these Watchers decided to subjugate them instead, beginning a rebellion that would rock both Heaven and Earth. Defeated, the most powerful of the Watchers were imprisoned for eternity, while the weaker ones were condemned to live out their existence on Earth, relegated to the shadows that now occupy human myths and legends.

Until one of the Watchers escapes.

Immortal protector of humanity and one-time hero of the Trojan War, Diomedes—better known as Steve Dore these days—is horrified to discover that what human authorities think is a mentally unstable cannibalistic murderer is actually a gateway to something ancient and apocalyptic. Racing against a cosmic timetable, Diomedes is drawn into a dark and sinister underworld in a desperate attempt to stop another uprising.

But stopping this enemy may cost him far more than his life. Some grudges never die.”

Rebellion Reborn begins by recounting events from a century earlier when Diomedes first encounters an evil Watcher who has escaped his prison. This evil manifests as a huge black shadow who kills randomly. We are also introduced to the heavenly crusaders who are sent to assist Diomedes. At that time all they managed to do was send the shadow scrambling into hiding.

Now one hundred years later this evil has a grand plan to release all the Watchers so they can rule our world again, without any pesky angles around to interfere. He has managed to organize lesser demons, succubae and higher functioning vampires, to collect humans to become vessels. They have utilized elite BDSM clubs to find suitable subjects. When the Department of Homeland Security gets involved Sarah goes undercover to infiltrate their operation to learn their plans. Steve Dore is against her joining the sting, but one of the reasons he loves her is because she is strong willed and independent. All pretenses between Sarah and Steve Dore have been thrown to the wayside.

The story arc is well written and the descriptive prose puts the reader near all the action. There are plenty of twists to keep the tension at an unrelenting level until the end. Now I need the next book by, like, tomorrow, okay? I’m not really happy with the ending, but it is more of a personal thing, because I can’t really see where things are going to go now. I’m probably more upset with myself because I felt like I knew Steve Dore better, and that may be the answer. I do know Steve Dore, but I don’t know Diomedes as well as I thought I did.

Rebellion Reborn is book 3 in Brian S. Leon’s, The Metis Files. Adult themes and language. If you are sensitive to either of these, this book may not be for you.