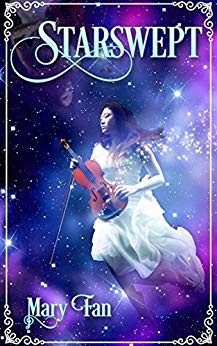 “In 2157, the Adryil—an advanced race of telepathic humanoids—contacted Earth. A century later, 15-year-old violist Iris Lei considers herself lucky to attend Papilio, a prestigious performing arts school powered by their technology. Born penniless, Iris’s one shot at a better life is to attract an Adryil patron. But only the best get hired, and competition is fierce.

A sudden encounter with an Adryil boy upends her world. Iris longs to learn about him and his faraway realm, but after the authorities arrest him for trespassing, the only evidence she has of his existence is the mysterious alien device he slipped to her.

When she starts hearing his voice in her head, she wonders if her world of backstabbing artists and pressure for perfection is driving her insane. Then, she discovers that her visions of him are real—by way of telepathy—and soon finds herself lost in the kind of impossible love she depicts in her music.

But even as their bond deepens, Iris realizes that he’s hiding something from her—and it’s dangerous. Her quest for answers leads her past her sheltered world to a strange planet lightyears away, where she uncovers secrets about Earth’s alien allies that shatter everything she knows.”

“Mary Fan lives in New Jersey, where she is currently working in financial marketing. She has also resided in North Carolina, Hong Kong, and Beijing, China. She has been an avid reader for as long as she can remember and especially enjoys the infinite possibilities and out-of-this-world experiences of science fiction and fantasy.

Mary has a B.A. in Music, specializing in composition, from Princeton University and enjoys writing songs as much as writing stories. She also enjoys kickboxing, opera singing, and exploring new things—she’ll try almost anything once.

I don’t generally read Science Fiction or dystopia, which earth is suffering from in Starswept. But the beautiful book cover drew me in and it’s good to stretch my wings once in a while.

Iris Lei is lucky enough to be born to parents while they were attending Papilio, a prestigious performing arts school, which therefore grants Iris automatic admission. She knows very little about her parents. But suspects her father aged out and must work off his debt for the education he received at Papillo, somewhere on earth, most likely in a poor paying factory job. Her mother was considered lucky to attract an Adryil patron, an advanced race of telepathic humanoids, who hire only the best artists.

At the age of fifteen Iris lives and breathes through her viola and the music it creates. One day an Adryil boy breaks into the school and passes Iris a piece of alien technology he can’t be caught with. Iris is smart enough to hide the piece from the security bots before they catch her with it. She has no idea what it is capable of, but it fascinates her and she keeps it with her at all times, especially when she discovers the boy she met can speak to her telepathically and via holograms as long as she has the device.

I found the first half of the book to move slowly as the author introduces her characters and paints the scenery of the school and the town outside of the school with its unfortunate inhabitants. It was interesting and in-depth for a full understanding of the world Ms. Fan has created.

The second half moves full on into science fiction as Iris is chosen by an Adryil patron. She’s excited to go on a starship to the alien planet in hopes of finding her mother and the mysterious alien boy who has captured her interest visiting her by holograms for the past weeks. The story takes off when Iris meets Cara, a member of the quartet Iris was hired to complete. The storyline is full of intriguing twists, rebel forces, and battles. Iris finds herself in situations that stretches her physical and emotional endurance well beyond what she thought she could endure. It’s an emotional rollercoaster ride that complicates a budding romance, destroys another committed relationship, and tears apart a family. All in all a captivating start to this new series.