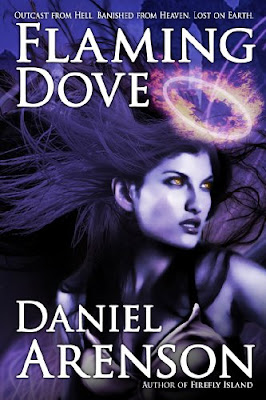 Since Armageddon, Heaven and Hell had beaten each other into a bloody, uneasy stalemate. It’s been twenty seven years and neither Heaven nor Hell is the clear winner in the war between good and evil. Set with the backdrop of post Armageddon earth, Daniel Arenson tells us the story of Laila, an Uzi and grenade carrying half-breed, fighting for a home or just a place to survive. Her mother was an angel, her father an arch-demon, Lucifer. Unable to survive in Heaven or Hell she was raised on earth. Born with claws, fangs, and bat-like wings, she is an outcast on earth as well.

Born in Israel in 1980, Daniel Arenson lived in Manitoba and New Jersey before settling in Toronto, Ontario. He holds a Bachelor’s degree in Computer Science and enjoys painting in his spare time.

He sold his first short story in 1998. Since then, dozens of his stories and poems have appeared in various magazines, among them Flesh & Blood, Chizine and Orson Scott Card’s Strong Verse.

In 2007, Daniel sold his first novel, Firefly Island, to Five Star Publishing. He's been writing fantasy novels since, including several standalones and two fantasy series: The darker Song of Dragons and the lighter Misfit Heroes. You can read more at his website.

The first character we are introduced to is Nathaniel. He is a jaded and gritty angel who had lost his wings and an eye fighting an arch-demon during the battle of Armageddon. He was my favorite angel and he drew me in. This story though is about Laila, both forces of Heaven and Hell think having Laila on their team will finally turn the tide in their favor.

When Laila returns to Jerusalem and finally chooses a side, she has her own agenda and refuses to follow orders. She will not let her fate be decided for her. Her only friends are Volkfair, a very large black wolf, who fights by her side, and Bat El, her innocent and pious angel sister, who has only been on earth a few months and serves as a captain in Michaels’ army. We learn of their relationship through flashbacks that are easy to follow. Humans are a rarity now and seldom mentioned. It was easy to feel the angst and exhaustion of the characters. God seems nonexistent, except to Raphael, who seems to be in the story only to remind us that God exists in all things.

The characters are complex, fully developed, and well-drawn; the plot is unique and flowed well. I enjoyed the tongue in cheek dialogue that served to lighten some scenes. The battle scenes were epic with tens of thousands of angels and demons, narrated with descriptive prose. The settings were vivid around Jerusalem, Caesarea, Masada and the Sea of Galilee. The ending was a bit surprising with a twist to leave us something to ponder and open enough for perhaps a sequel.

Arenson did get a bit repetitive in a few places describing angel wings and demon wings, but not enough to remove a star or lessen my enjoyment of the whole story. This story may cause you to rethink or reevaluate your concepts of good and evil.

If you cannot handle spitting, cursing, hard edged angels, or devils who have a heart and react with some humanity this book may not be for you.