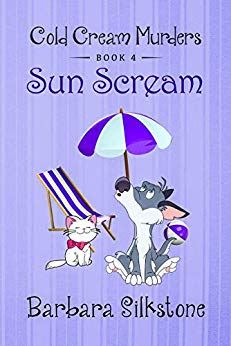 “A series of peculiar and highly suspicious accidents threaten the life of the Loud Mouth of the South. Can Olive and Lizzy find the predator before their friend becomes the victim at her own Murder Mystery Party?”

Jamie Toast, Loud Mouth of the South, wants to have a Murder Mystery Party for an open house where all their friends dress up in roaring twenties attire. Jamie isn’t really a likeable character, but Olive and Lizzy have befriended her. The week before her party, mysterious accidents start happening to Jamie, which could have all been life threatening. All evidence seems to point to her husband, Chip Toast.

In the meantime, Sophia Napoli, an Italian film star, is considering backing and endorsing Nonna’s Cold Cream. One of her conditions is that Olive and Lizzy have to stop their crime busting antics, they would have to leave that up to the local police. Their involvement wouldn’t reflect well on Sophia. Olive agrees, but is torn. Being a psychologist, one of the things she does for the police is profile the people Kal brings in for questioning. She won’t let that go and figures she could do it on the sly.

Grams, Lizzy’s grandmother, is a spunky old coot who assigns herself, with her large brass candlestick, as Jamie’s bodyguard. She is also convinced that Chip is guilty of setting up the traps to kill Jamie. The night of the Murder Mystery Party Lizzy and Olive are assigned their roles to play. Everyone is having a good time and the game goes as planned with Jamie and her death scene. Then one of the party goers falls from one of the balconies and dies. Another mystery needs to be solved. This woman could have been mistaken for Jamie from behind. Was this another attempt on Jamie’s life?

Kal, Olive, and Lizzy scramble to clear Chip Toast and find the real person behind Jamie’s life-threatening attacks. And solve the real murder at the party. Was the woman pushed or did she jump to her death? Nothing can be found to link her to any of the party attendees. Olive invited her and her guest to the party. All possible leads are dead ends. Join Kal, Olive and Lizzy as they try to solve an unsolvable mystery…

Thank you so very much for the super review!