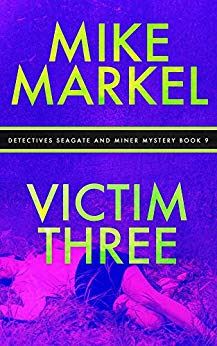 “When graduate student Cassandra Lyons is found stabbed behind the wheel of her car in her condo's garage, Detectives Seagate and Miner suspect her live-in boyfriend, Richard Harson. Only a week before, the police responded to a domestic-disturbance call at their condo. The shouting match had something to do with Richard's affair with his ex-girlfriend, as well as Cassandra's ongoing relationship with Will Nyland, a distinguished professor. Cassandra and Nyland had just returned from a professional conference, also attended by another graduate student, Beth Park. When a video shot in a hotel room surfaces, apparently showing Cassandra and Nyland raping Beth Park, the detectives devise a new theory of the case: Beth Park exacted her revenge on her fellow grad student. But when another woman is found dead and Beth Park disappears, the detectives believe she is about to become the third victim.”

“Mike Markel writes the Detectives Seagate and Miner Mystery series, which is set in the fictional small city of Rawlings, Montana, home of Central Montana State University. That university is somewhat like Boise State University, where Mike taught writing, but in Rawlings the weather is colder, the football team less successful, and the murder rate much, much higher.
Mike lives in Kirkland, WA.”

This brings the Detectives Seagate and Miner Mystery series to 9 books. The first several books were great in two way. First, they’re just good police procedurals. Plus, I have an easy time picturing Rawlings, MT, the fictional college town where the series takes place as it is much like the town I live in (smaller Western city dominated by a state university). The second thing that drew me in was the relationship and contrast between the two partners, Karen Seagate, the single, recovering alcoholic and Ryan Miner, the younger, straight-arrow Mormon family man. As the series has gone on this second draw has become “just the way it is” and isn’t as noticeable anymore. But I’ve continued to be entertained. The stories have continued to get me thinking about things. Those things have just been different.

In this case the story should have you thinking about the #MeToo movement. About men with power who take advantage of women and how institutions and other people have protected them in the past and all too often continue to do so. I guess you could say that the basics of this story were “ripped from the headlines,” but the author has put his own spin on it, keeping it entertaining and intense, as all good detective stories should be, as Seagate, Miner, and the reader try to figure out what really happened.